The contents of Guntweaks.com are produced for informational purposes only. Any modifications to a firearm should be performed by a licensed gunsmith only. Modifications may void warranties, create an unsafe firearm, and/or may cause injury or death. Guntweaks.com and its authors do not assume any responsibility, directly or indirectly, for the safety of readers attempting to use or misuse information, instructions, or procedures provided herein.

DIY Barrel Threading Resizing (turning down a barrel by hand)

Many of us have wanted to thread a barrel at some point. Surprisingly, threading a barrel with a hand die is not difficult and commonly costs only $30 or so in parts, however, the outside diameter (OD) of the barrel must be exactly the correct size in order to thread by hand. For example, 1/2x28 threads (common in AR-pattern rifles) require that the muzzle OD be .4957” , ± .0033”. In other words, the muzzle diameter must be between .4924" and .499" This level of precision, along with the need to keep the barrel OD perfectly concentric (perfectly round), is what prevents the casual shooter from threading their own barrel. The OD of gun barrels at the muzzle varies hugely and almost never matches up to the correct size for threading, and re-sizing the barrel OD with common hand tools is next to impossible (or so it has been thought).
All of the above was accomplished with commonly available hand tools.
Having your barrel OD re-sized and threaded professionally will cost $150+. You could always buy yourself a drill-operated OD cutter, but they are expensive at around $75, can only be used with one caliber barrel to cut one size OD, and feature a centering pilot that can chew up the bore of your barrel if used improperly.
​
However, I have come up with an extremely low-budget alternative that gets the job done just as well as the more expensive routes, using parts you probably already have in your toolbox. It may sound (and look) a little... unorthodox... but the results and cost-savings are tough to argue with. Even if you have to buy pretty much everything on the list, the parts are still cheaper than a single OD cutter, and yet the same set of parts can be used for any size thread and any size barrel OD, so you can thread multiple different barrels on multiple guns. Additionally, this procedure does not involve a bore pilot, so there is no risk to the barrel's rifling.

The only notable downside to this procedure is that it requires the barrel be shortened by 1/3”. Cutting the barrel can be a great way to ruin a perfectly good gun, so if you’re not comfortable with the techniques to properly cut and crown your barrel, or the cost of having someone do it for you, then this procedure isn’t going to work for you. On a more minor note, the end of the barrel will need to be refinished (cold blue works fine in most applications).
Tools Required
​Total cost = $0 ~ $80, depending on what you had to start with. 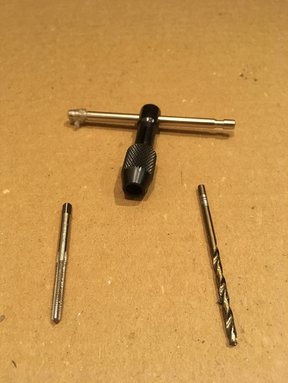 The only "special" tools you might need are the calipers and drill/tap bits, and of course the threading die in your chosen muzzle thread.
​However, I would argue that you should have them already if you're really planning to thread your own barrel.
Step 1
Remove the barrel from the firearm if possible, or remove as much hardware from the barrel as possible (stock, handguard, trigger, receiver, sights, etc.)

Step 2
Pick a socket that fits over the muzzle nicely. You want a snug fit.
​
Step 3
Remove the socket from the barrel and drill/tap two holes on opposing sides of the socket. Drill about 1/3” from the open end of the socket. These threaded holes are for set screws to secure and center the barrel. I chose M4x0.7 because that's the tap I use for most general-purpose shop tasks, but the world is your oyster, so use any size thread that is readily available to you.

Note: The set screws are mostly to hold the barrel in the socket, and cannot be relied on to center the barrel in the socket. This is why you must pick a tight-fitting socket; if there is a substantial gap between the OD of the barrel and the ID of the socket, your barrel will twist and wobble and you'll get no where.
You don't need precision, just try to ensure the holes are roughly opposite one another. If you really goof up (like I did), just drill a third hole and make it a triangle. If the socket fits really tightly, you can even make do with just one set screw.
Step 4
Clean the socket and socket-drill chuck adapter with rubbing alcohol or acetone to prep them for epoxy.

Step 5
Once the parts are clean and dry, mix up about a teaspoon of JB-weld.
​
Step 6
The socket adapter needs the epoxy to hold the weight of the barrel without popping free, so coat the tip of the socket-hex chuck adapter with JB-weld and insert it into the socket base. Apply the remaining JB-weld where possible to ensure the two pieces are firmly mated. Allow ~24 hours for the JB-weld to cure.

NOTE: Just smack the assembly around a bit after you're all done to get your socket back.

Alternate Method: You can also drill/tap holes for set screws in the base of the socket to secure the socket adapter. However, the steel at the base of the sockets is much thicker and the drill/tap process will be much more difficult than drill/tapping the thin lip of the socket. If using a hand drill, I recommend using the epoxy. With more sophisticated tools, go with whatever floats your boat.
I used three set screws here because this socket's fit was looser than I wanted, but I've done it using only one in the past.
Step 7
Insert the muzzle of the barrel into the socket, just far enough that it can be gripped by the set screws. Use the set screws to secure the barrel in the socket, and tighten. Exact center is not required, just do your best.

NOTE: The portion of the barrel that sits inside the socket will not be resized, and will later be cut off. 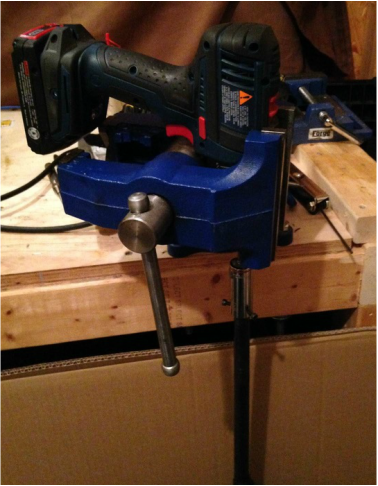 I know... but bear with me here. It gets better.
Step 8
Install the drill chuck adapter with attached barrel into the hand drill. Rest the hand drill on a bench vise or let it hang off the end of a worktable. Adjust the vise or add shims so that the barrel hangs as vertically as possible.

Step 9
Sit in a chair in front of the hanging barrel, and grip the barrel loosely between your knees. Press the file against the barrel underneath the socket, and use your other hand to work the drill's trigger.

Step 10
​Slowly bring the drill up to speed. The barrel will wobble at lower speeds, but control its position using both the pressure of the file and your knees. Once the spin is relatively stable, speed up the drill. The wobble tends to subside at higher speeds.

Step 11
Keep the file pressed against the same spot and check your progress often with the calipers. Adjust your knees or the pressure from the file as needed to minimize wobbling. Continue the procedure until your barrel is sized down properly. 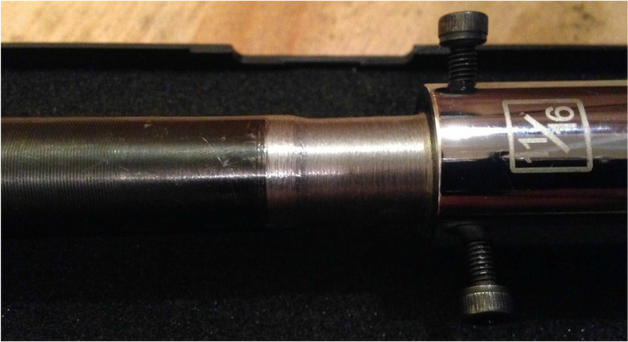 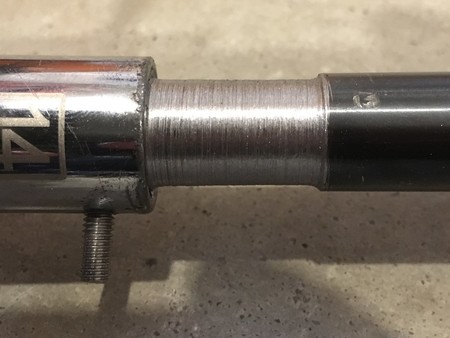 How about them apples?
Step 12
Loosen the set screws and remove the socket.

Step 13
Cut off the unsized portion of the barrel using your preferred method. The shoulder formed by the difference in OD makes an excellent cutting guide.
​
Step 14
Happily thread  your newly re-sized barrel. Don’t forget to flatten and crown the muzzle. 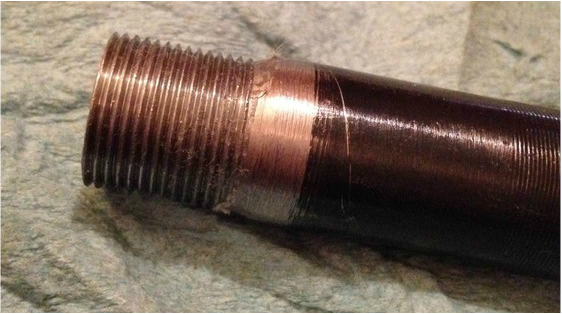 ta-daaaaaaaaa!
Step 14
​Never tell anyone how you did it because they will laugh their asses off.
​Final notes
​
Thus far, I've used this procedure to thread three barrels, as well as a short section of surplus 10/22 barrel to practice pinning and welding a muzzle device. The system works, but it is not a cure-all. You need to cut off the part of the barrel that sat inside the socket wrench so if shortening your barrel is a deal-breaker, you’re out of luck. I also wouldn’t try this on a barrel that needed to be sized down substantially, like a heavy-profile or bull barrel.

​I also don’t pretend this is the method you want to use on a $2,000 precision rifle or to mount a 10” suppressor. However, for many people there will be a $0 to $25 cost to take a swing at this method of reducing your barrel's OD, and the worst that could happen is that you have to take the barrel to real gunsmith to have them shorten and re-crown your mangled muzzle. If you have some time, tools, and a little bit of courage, there’s no reason your rifle can’t wear a muzzle device, for very little cost to your wallet.
​
Good luck!
The contents of GunTweaks.com are produced for informational purposes only. Any modifications to a firearm should be performed by a licensed gunsmith only. Modifications may void warranties, create an unsafe firearm, and/or may cause injury or death. GunTweaks.com and its authors do not assume any responsibility, directly or indirectly, for the safety of readers attempting to use or misuse information, instructions, or procedures provided herein.
GunTweaks.com