Why Glock Magazines in 9mm AR-15s are a Bad Idea

Which Glock AR lower is best? The answer is: maybe none of them. This article aims to prove that Glock magazines in long guns are a fun and convenient gimmick, but when it comes to Glock mags vs. Colt, Scorpion, or MP5 magazines, the Glock mags lose out and should be dropped from the discussion completely.

​In their original role as a handgun magazine, Glock magazines are completely suitable for cannot-fail defensive applications. Meanwhile, long guns that use Glock magazines (9mm ARs in particular) have come a long way in recent years, and current models can be relied on for trouble-free plinking and, in some cases, even serious competition. However, Glock magazines should never be used in long guns for defensive applications, because they have several insurmountable design flaws for that use case and remain categorically inferior to the existing range of purpose-built submachinegun magazines. While both types of magazines will work, purpose-built submachinegun magazines will work better - read on to find out why. 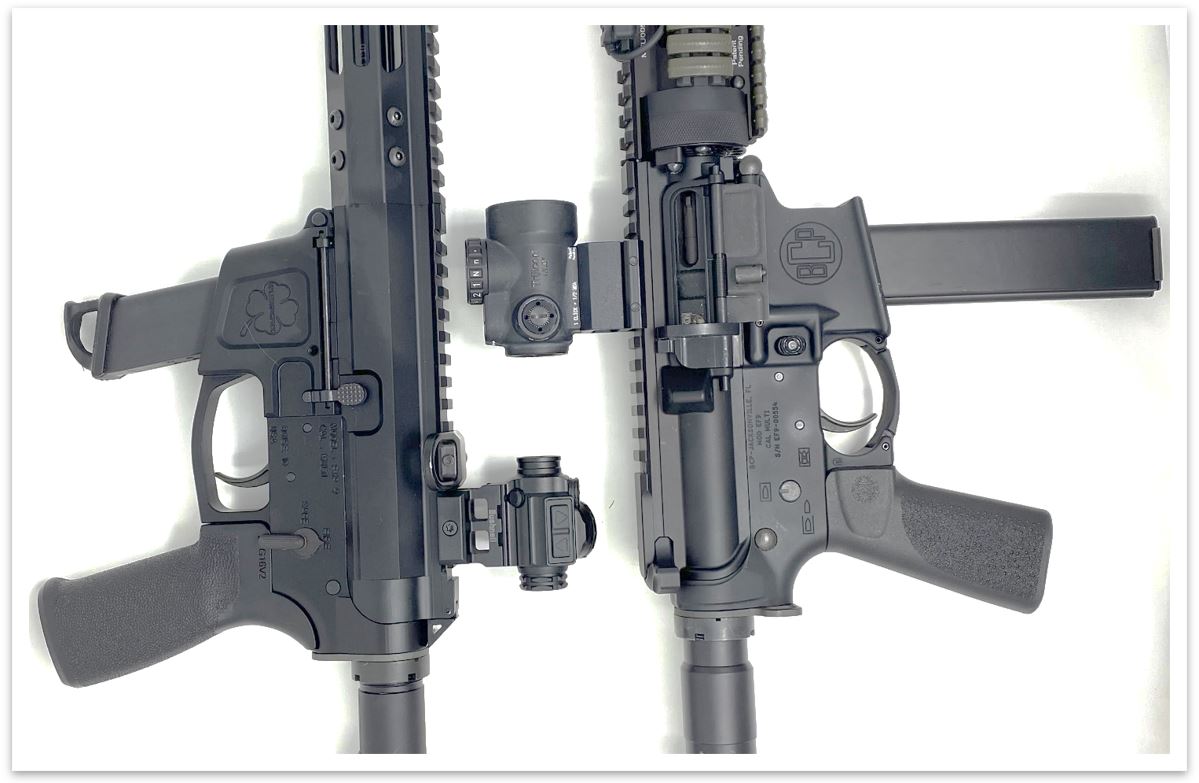 What stick best to feed boom-boom?

There are several reasons that Glock magazines perform well in a handgun and poorly in a long gun, which are detailed below in no particular order:

​A Glock magazine uses a double-stack single-column feeding approach, meaning the magazine is wide enough to hold two columns of cartridges, but narrows at the top to present one round at a time, each in the same position as the last. In contrast, most submachine gun magazines use a double-stack double-column feeding approach, meaning the magazine does not narrow at the top, and alternates each round’s feeding position. 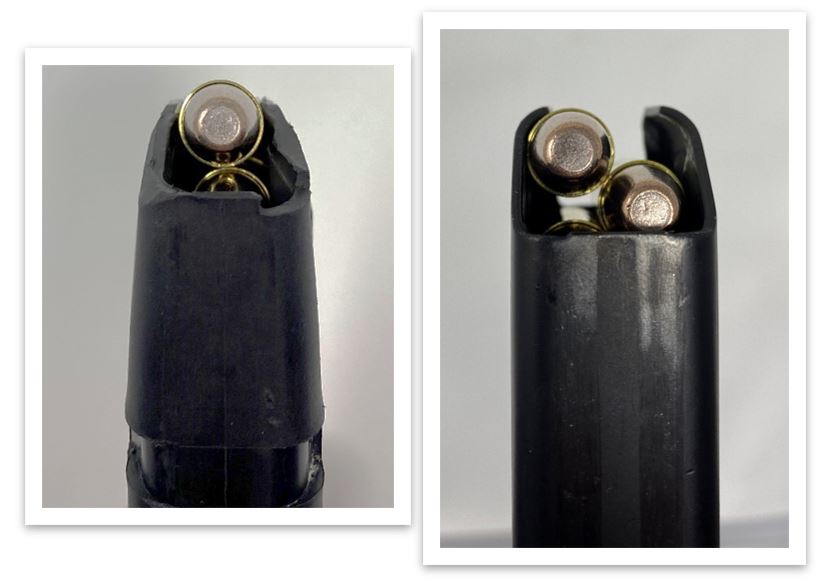 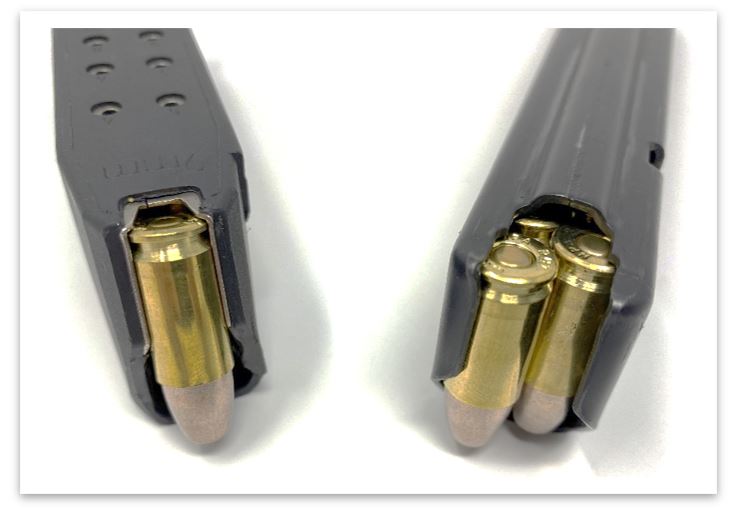 The Glock magazine on the left only grips the top cartridge with the tips of its feed lips.
​The Colt SMG magazine on the right wraps its entire feed lip around the cartridge, gripping it in place
Note: Another unpleasant side effect of double-stack single-feed magazines is that they are very difficult to load by hand. The top round must be pushed down manually before the next round can be loaded, and on top of this, engineers compensate for the binding at the top of the mag by using a very strong magazine spring. All totaled, these mags are a pain to load without some sort of loading tool.

If you look at a quality pistol caliber carbine (PCC) that was developed from the ground up to use pistol magazines, such as the Beretta CX4 or Ruger PC9, you’ll notice a few common features:

The above 3D rendering of a Beretta CX4’s breech during feeding shows the gun’s overshoot stop and feed ramp. Combined with a magazine housed inside the grip (and thereby protected from the elements), both features contribute to the CX4’s legendary reliability – it is the only pistol magazine-equipped long gun we know of that is issued in noteworthy numbers to military and police forces (examples pictured at right). It also has a successful fully-automatic variant, the MX4.
​​Glock magazine-equipped ARs typically have neither an overshoot stop nor a feed ramp (we do not feel that slightly counter-boring the chamber entrance of a 9mm AR barrel constitutes a legitimate feed ramp) and instead rely on the magazine’s positioning within the receiver to ensure direct feeding into the chamber. Unfortunately, this leaves the system vulnerable to over/under-insertion of the magazine, as well as simple loosening of tolerances as parts wear over time. The lack of an overshoot stop and feed ramp can (sometimes) be ignored if the shooter exclusively uses FMJ or other round-nosed bullets, but the failure rate will typically rise sharply once hollow-point bullets begin to make up a substantial portion of the gun's diet.

On the other hand, Colt SMG magazine-equipped ARs (as well as MP5 and Scorpion magazine ARs) have robust feed ramps integrated into the lower receiver and generally do not need an overshoot stop, since their double-stack double-feeding magazines do not “pop” rounds upward like a Glock magazine regardless of whether they are hollow points or FMJ.

​One company, TACCOM3G, produces proprietary feed ramps and overshoot stops for Glock magazine-equipped 9mm ARs, but so far the practice has not generalized across the industry.

The BHO lifter on a 5.56 AR magazine is at the rear of the magazine body, ditto for the 9mm Colt SMG magazine and most double-stack double-feed subgun magazines, so it only takes slight modification to get the magazine's BHO lifter to work with the AR-15 lower receiver’s BHO paddle. Older systems used a special “long finger” 9mm BHO paddle, but the best designs of today (like the Black Creek Precision EF9 Lower or the Hahn Precision Dedicated Magwell Adapter) can use a regular AR-15 BHO paddle.

In contrast, the BHO lifter for a Glock magazine is at the front of the magazine body, so for a while, Glock magazine-equipped AR lowers didn’t even have functioning BHO paddles (companies like PSA and CMT still make such lowers today in Q1 2022). As years passed, different manufacturers each came up with their own unique and proprietary Rube Goldberg-esque system of levers and linkages to get the Glock magazine’s front-mounted BHO lifter to work with the AR-15’s rear-mounted BHO paddle. Some work well, some don’t, but all of them require special-order replacement parts if something breaks, whereas you can pick a replacement BHO paddle for a well-built Colt SMG magazine-equipped lower out of any standard AR-15 LPK. 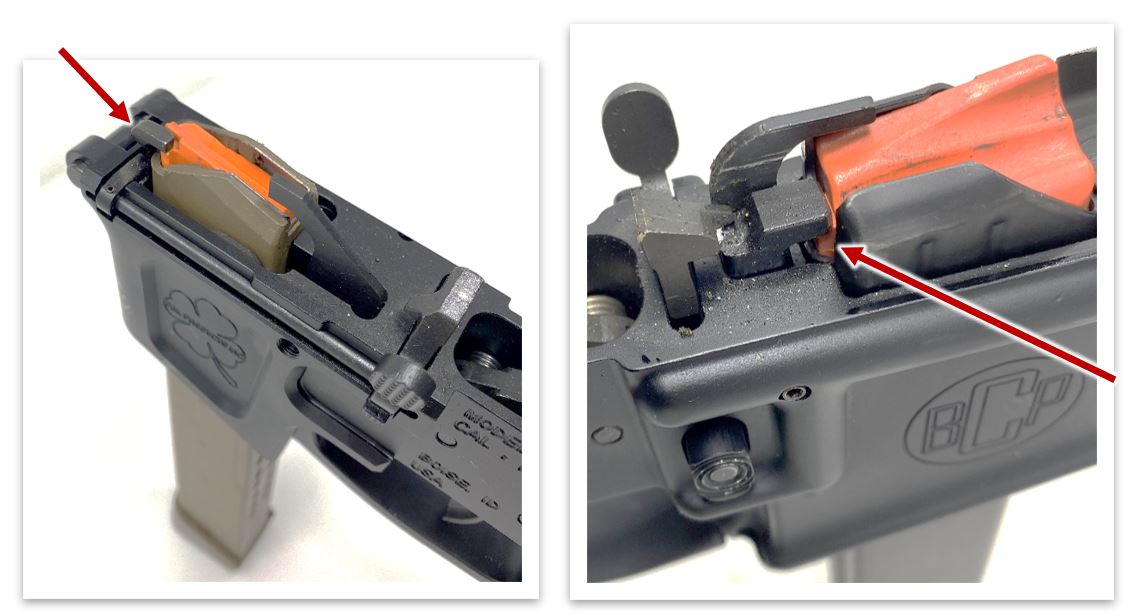 Foxtrot Mike is one of the most popular Glock lowers on the marker, and their lower (shown on the left) employs several levers and linkages to get the BHO lifter to actuate the BHO paddle, with every piece of the system being proprietary. In comparison, the Black Creek Precision Colt SMG lower on the right has a single moving piece – a sturdy chunk of metal that slides up and down, actuating a standard AR-15 BHO paddle
Reason #4: Glock magazines are full of holes

This is the simplest and maybe most compelling reason to never use a Glock magazine in a cannot-fail defensive application (outside of a handgun). Glock magazines have an unusually large number of witness holes in the back of the magazine, which helpfully allow an exact count of remaining ammunition. However, these witness holes also allow mud, dirt, sand, or other debris to easily enter the magazine and jam up the action. The witness holes are supposed to be shielded from the elements by the grip of a Glock handgun, but in a long gun they are exposed, just one drop into the dirt away from a serious malfunction. 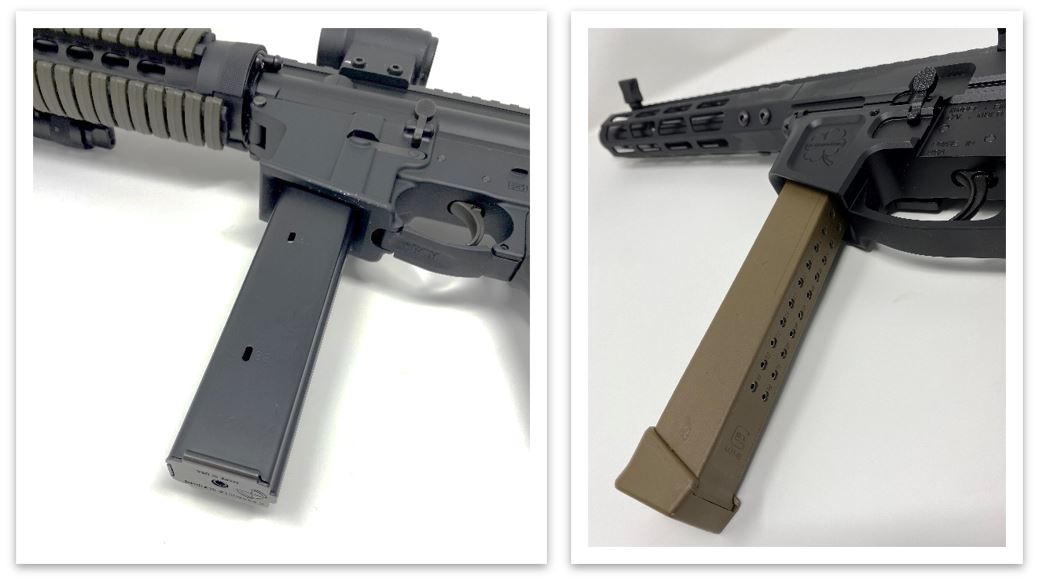 It’s worth pointing out that if Glock magazines in a combat long gun are a good idea, then we would see them in military/police armories and not just in civilian gun safes. Brugger and Thomet (B&T) has Glock-compatible lower receivers for their APC9 and GHM9, but the original design used a proprietary B&T stick magazine and we have yet to see a photo of a SWAT team (or international SWAT equivalent) using a Glock mag-equipped B&T, and we doubt we ever will.

Meanwhile, the 9mm Tavor, Uzi, and the Colt 9mm AR-15 all use Colt SMG magazines (Uzi mags and Colt SMG mags differ only in the placement of the mag catch) while the MP5, UMP, Vityaz, 9mm AUG, SMG-45, all B&Ts, and pretty much any “serious” SMG you can think of will all use some kind of dedicated submachine gun magazine. Of all types, a slightly curved stick magazine like the MP5, UMP-9, Scorpion Evo, or Vityaz is the most ideal, as the curve provides the smoothest feeding for the very slight taper of a 9mm case.
​
The only exception to this rule is the Kriss Vector, which does use Glock magazines natively and is occasionally seen in the hands of police departments both at home and abroad. However, the Vector is really the exception that proves the rule because it must use an angled pistol magazine due to its Super V operating system. Otherwise, we’d place decent money on it using some other kind of proven submachine gun magazine.

The Kriss “Super V” system angles down toward the ground during cycling, so it needs an angled magazine (like a Glock’s) to function.​
Reason #5.1 - No “serious” AR-15 manufacturers use Glock magazines, either

Stepping back from the world stage, it’s also helpful to look at just the American 9mm AR market. As of Q1 2022, no “serious” AR manufacturers produce a Glock-magazine equipped 9mm AR (in fact, only Noveske and Colt make a 9mm AR at all, which may say something about the viability of the whole 9mm AR concept, versus a dedicated subgun like a MP5 or APC9). The day that Daniel Defense, BCM, KAK, LMT, LaRue, Radian, etc. produce a 9mm AR-15 that takes Glock magazines is the day that we will take the idea seriously.

The one exception (maybe) is Wilson Combat, who make the unexcitingly-named “AR9 Carbine” that takes Glock magazines. Still, one exception does not make a rule.

Manufacturers will always invest more into their flagship products than their niche products, so it’s reasonable to assume that Glock spent a lot of time and money perfecting their 17-round magazine, and then spent a lot less time and money modifying it into a 33-round extended version. By that same logic, it’s reasonable to assume that a dedicated submachine gun magazine has been designed from the ground up to hold ~30 rounds, and does it perfectly.

Just because 33-round Glock magazines are available on store shelves does not mean they are identical in quality and reliability to the company’s flagship 17-round mags. If using a long gun with Glock magazines for defensive applications, it may be advisable to stick to the 17-round factory OEM magazines, limiting capacity dramatically compared to a true submachine gun. 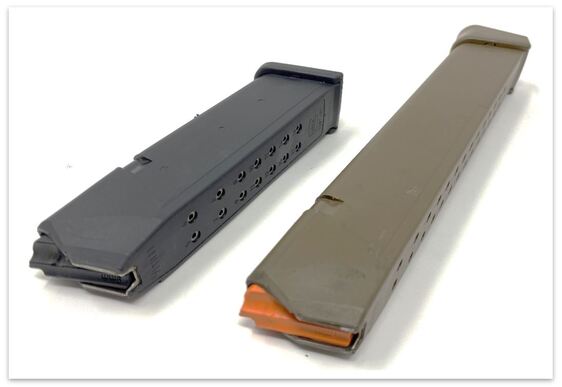 Glock’s 17-round magazines are known for being bulletproof, but if you ask around,
​you’ll find that opinions on the extended 33-rounders are noticeably more mixed (if generally still positive)

So that's it - all our reasons why Glock magazines are bad in long guns. All that said, we can already hear a storm of incensed readers screaming "my Glock AR has never failed me once!" and we recognize that for some shooters, that truly is their experience. However, we also want to emphasize that this discussion is focused toward cannot-fail defensive reliability, which is a game of miniscule probabilities. A well-built Glock magazine-equipped AR can be a very reliable machine, maybe only seeing a magazine-induced failure once in every (just pulling numbers out of thin air) 1,000 rounds. The problem is that, if all other things are equal, an AR that feeds from a true subgun magazine will most likely only see a magazine-induced failure every 2,000 rounds. Most shooters just don't pound enough rounds through their weapons to notice the difference, but that doesn't mean the difference is not real.

Most of us at GunTweaks still own and enjoy Glock magazine-equipped ARs - they're just so handy when you've already got a Glock and a basketful of mags for it. We just wouldn't turn to one when it really counted, that's all.

​Shoot us a message on the Contact Us page if you have questions.

​Happy shooting.
The contents of GunTweaks.com are produced for informational purposes only. Any modifications to a firearm should be performed by a licensed gunsmith only. Modifications may void warranties, create an unsafe firearm, and/or may cause injury or death. GunTweaks.com and its authors do not assume any responsibility, directly or indirectly, for the safety of readers attempting to use or misuse information, instructions, or procedures provided herein.
GunTweaks.com