7.62 Tokarev: The Most Historic Pistol Round in the World 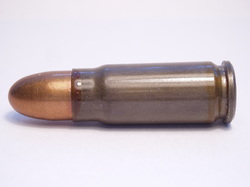 Steel-cased 7.62 Tokarev cartridge
There's a good chance you've never heard of 7.62 Tokarev, also known as 7.62x25mm. It's a round that doesn't get much notice, and is considered by many to be obsolete. I would take issue with that, but will digress for now, because the real lesson of today is why 7.62 Tokarev is astonishingly historic, not why it's underappreciated. Shooting 7.62 Tokarev is like time-travelling to the very beginning of modern firearm design, back to the deepest roots of the field. To explain, we have to go back to the very beginning, the true genesis of not only the modern pistol, but the modern, man-portable auto-loading firearm as a whole. The Borchardt C-93.

Hugo Borschardt's C-93 Pistol
The year was 1893, and Hugo Borschardt made his pistol in a time dominated by revolvers. The Borchardt pistol had three pretty awesome attributes that we take for granted today: it required only a trigger pull to fire, it loaded from a detachable magazine housed inside the grip, and it could be mass-produced. Unlike the common single-action revolver, the Borchardt didn't need to be cocked between shots, and it could reload in seconds via a box magazine. At the time, it was big news, allowing a rate of fire so far above its competitors that it's difficult to really comprehend today, immersed as we are in a world of 30-round magazines. There was simply nothing else like the Borschardt, outside of artillery pieces and fantastically expensive custom projects.

The radical and unique Borchardt pistol came with a radical and unique new bottlenecked round, 7.65 Borchardt, as none of the straight-walled, rimmed revolver cartridges were really suitable for autoloading designs. The Borchardt and its ammunition were successful purely on the basis of their revolutionary design, but it quickly became apparent that there was room for improvement. Eventually the Borchardt's excessive recoil, uncomfortable grip, and lackluster stopping power gave way to the classic "broomhandle" Mauser C96, a semi-automatic pistol which was cheaper, more reliable, and more ergonomic, although the C96 took several steps backward in design, as it was fed by stripper clips, did not house its magazine in the grip, and was unusually large and bulky even by the standards of the day. The 7.65 Borchardt round, however, left little to be desired and was so well-suited to auto-loading designs that the Mauser engineers immediately appropriated it for the C96, simply packing more powder into the 7.65 Borschardt case and calling it "7.63 Mauser". Despite the different measurement in the name, the two rounds are dimensionally identical, but the hot-loaded Mauser round had better lethality and was considered unsafe to use in the older, weaker Borchardt pistol. 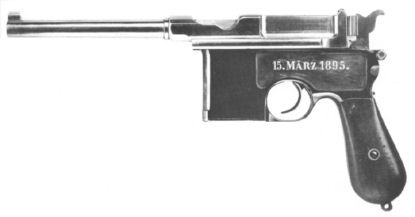 The classic Mauser C-96. Sidenote: In Star Wars, Han Solo's blaster pistol is built on a prop gun Mauser C-96.
Decades pass, and despite its drawbacks the Mauser C96 is the workhorse of nations around the world, with plentiful 7.63 Mauser ammunition found in most corners of the globe. Yet, the C96's drawbacks compared to the Borschardt and other emerging semi-automatics are well-known, so the Russians begin working on their own modern semi-automatic pistol, the Tokarev TT-33, borrowing many design elements from Browning's earlier M1911. The Russians wanted to take advantage of the existing stockpiles of 7.63 Mauser, but also wanted to prevent other nations from using captured Russian ammunition (a theme they would repeat decades later with the 9x18mm Makarov). They pack even more powder into the 7.63 Mauser (which was itself a hot-loaded 7.65 Borchardt) and call it, you guessed it, 7.62 Tokarev. This new round is again, despite the name change, dimensionally identical to the 7.63 Mauser and 7.65 Borschardt, but loaded to the brim and unsafe to fire in guns chambered for the older, weaker parent cartridges. However, 7.62 Tokarev guns can readily digest the stockpiled 7.63 Mauser, and Russian pistols and submachine guns did so to great effect using captured German stores in World War II. 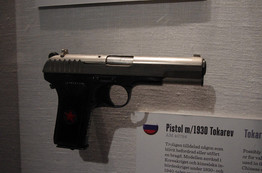 The Russian Tokarev TT, designed in 1930 and used throughout World War II, was chambered for 7.62 Tokarev.
So there you have it. 7.62 Tokarev, a round which is still coming out of factories today, is dimensionally identical to the genesis of auto-loading pistol rounds, the 7.65 Borschardt. Put the two rounds side-by-side and it's tough to tell the difference, though one was designed and produced over a century ago. 7.62 Tokarev ammunition and guns that chamber it are still available with a little digging, so go shoot a gun chambered for 7.62 Tokarev, and try to feel the history for yourself.

And now one more thing, to top off this whole ridiculous story.

It didn't take long for pistols to start leaning away from hot, fast rounds and more towards fat, slow rounds. By 1911, Americans had made the "flying ash tray" .45 ACP their issue pistol round, and the short, stout 9mm Luger round has been the world standard since around the same time. From a pistol-length barrel, these short, fat rounds have better lethality and became the norm, while lean, fast pistol rounds like 7.62 Tokarev were considered obsolete. In the past few decades, however, body armor has become cheap and readily available, and the submachine guns shooting .45 and 9mm have started disappearing from armories. These fat, slow rounds are easily defeated by body armor, forcing a shift to carbine assault rifles, which are generally louder, heavier, and increase the risk of unintended civilian casualties as the powerful rifle rounds over-penetrate in densely populated areas. In response to this phenomenon, a new class of guns called Personal Defense Weapons (PDW) has emerged, which use new and unique rounds that combine the small size of a pistol round with the speed and penetration of a rifle round, defeating body armor but sacrificing stopping power and long-range authority.

PDW ammunition is expensive and exotic, but if you place it side-by-side with a 7.65 Borschardt round, well, you might smile a little bit. Not twins, but definitely related.  Grab that 7.65 Borschardt round, designed in 1898, and pack it full of powder until it's called 7.62 Tokarev. Then, you've got a round that's known for its screaming velocity, capable of piercing a hardened steel Nazi helmet as well as many types of modern body armor, not unlike a fancy, ultra-modern, "exotic" PDW round.

Two modern PDW rounds, 4.6x30mm and 5.7x28mm. Look familiar? (metrically, 7.62 Tokarev is 7.62x25mm)
The more things change, the more they stay the same. It seems Hugo Borschardt, born in 1844, had it right all along.
C-93 Photo courtesy of Bob Adams (http://www.adamsguns.com) (Adamsguns.com)
PDW Photo courtesy of By Dean Grua (from author via. email) [CC BY-SA 3.0 (http://creativecommons.org/licenses/by-sa/3.0)]
The contents of GunTweaks.com are produced for informational purposes only. Any modifications to a firearm should be performed by a licensed gunsmith only. Modifications may void warranties, create an unsafe firearm, and/or may cause injury or death. GunTweaks.com and its authors do not assume any responsibility, directly or indirectly, for the safety of readers attempting to use or misuse information, instructions, or procedures provided herein.
Photo used under Creative Commons from liftarn
GunTweaks.com