A ranger carbine is a civilian firearm built to excel at tasks and scenarios where AR-pattern, AK-pattern, and similar rifles tend to underperform. An individual civilian has wildly different priorities and resources versus a military or police division, so the ranger carbine optimizes concealment, mobility, and cold-bore accuracy - a civilian's best (and sometimes only) assets. 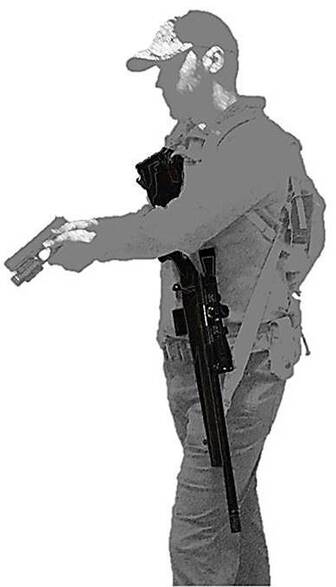 The ranger carbine is meant to be paired with a sidearm, a war belt, and a small backpack. This "civilian rig" offers discreet aesthetics, low weight, and practical firepower,  yielding tactical competence in many situations that could be encountered by the isolated, armed civilian.
AR-pattern, AK-pattern, and similar rifles offer enormous firepower and their place in civilian gun vaults is assured – there are times when no other gun will do. However, the performance of these military-derived guns burns bright and fades fast when they are cut off from a government logistics and supply chain, such as when they are placed into civilian hands. As a civilian, if you find yourself needing that much firepower, then you are either very unlucky or (more likely) you have simply made too many mistakes that day.

Some threats are best neutralized via a civilian’s unique superpower: obscurity. Only as a plainclothes civilian can you be unremarkable, even unnoticeable - until the moment you act.

The ranger carbine’s discreet appearance, outstanding mobility, and cold-bore accuracy are potent assets in civilian hands, with the inconspicuous silhouette being arguably its most important advantage. While all firearms will attract some amount of attention, AR-pattern, AK-pattern, and similar rifles have extremely distinctive silhouettes that make the civilian carrier a priority target for everything from overflying drones to hidden sharpshooters to search-and-seizure operations intent on curbing civil unrest.

​​​​Threats such as these are incredibly discouraging - they are difficult to anticipate, often impossible to counter, and they render an individual civilian’s ​bravery, skill, and firepower meaningless. The AR-pattern, AK-pattern, and similar rifles that already populate private gun vaults are powerful weapons well-suited for certain types of fights, but many threats on the civilian’s battlefield demand the element of surprise and a speedy, discreet withdrawal much more than they demand firepower.
Concealment. Mobility. Accuracy.
​ These are the assets of the armed civilian. These are the assets of the ranger carbine.
Documents
Click any of the below images to begin download of a document, and see below for descriptions and explanations of each.
The single-page Ranger Carbine Fact Sheet quickly summarizes the basic points behind the ranger carbine concept. It is a "big picture" look at the what, why, and how of the ranger carbine, and is ideal for inexpensive printing and distribution.

The Ranger Carbine Build Guide and Doctrines of Use​ booklet lays out the tenets of the ranger carbine concept in much greater detail, for those who would like to learn more and potentially begin their own ranger carbine build. The booklet can be either printed or viewed electronically.

The electronic version is intended for viewing on all electronic devices (smartphones, laptops, desktops, tablets) and proceeds page by page, in order.

The print version has its pages flipped and re-ordered for printing on both sides of the page - the finished stack of pages can simply be removed from the printer, folded in half as one stack, and then stapled to create a convenient and readable booklet.
Got questions as you plan out your build?
Build completed and want to show off some pictures?

Click the link to send us a message on our contacts page!

We love talking ranger carbines and want to hear from you!
The contents of GunTweaks.com are produced for informational purposes only. Any modifications to a firearm should be performed by a licensed gunsmith only. Modifications may void warranties, create an unsafe firearm, and/or may cause injury or death. GunTweaks.com and its authors do not assume any responsibility, directly or indirectly, for the safety of readers attempting to use or misuse information, instructions, or procedures provided herein.
GunTweaks.com