---   DISCLAIMER   ---
Applied Gear is currently an advertising partner with GunTweaks.com. This means that we like them and their gear - nothing more. GunTweaks is self-funded with most of our ad partners providing us equipment to review, but when we do receive cash ad revenue, 100% of it goes right back into the site to offset our web hosting fees, shipping/transfer fees, etc. This ensures we stay independent so that you, the reader, can trust our reviews. 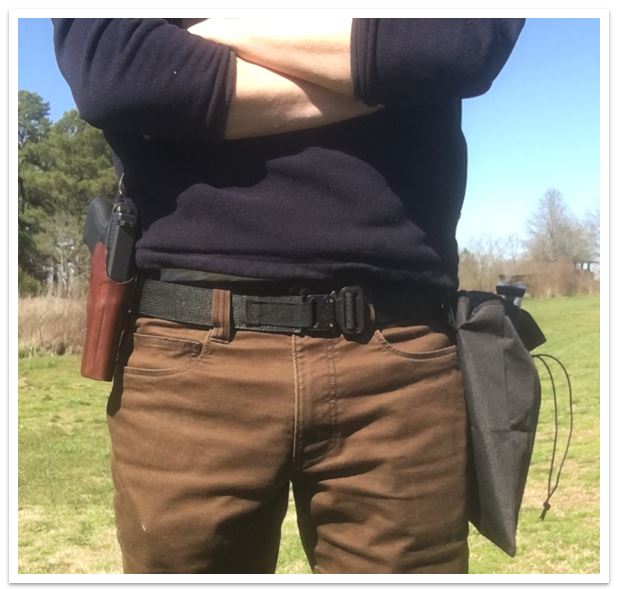 EDC setups are typically much lighter than the Glock 17 and dump bag full of AR magazines shown here,
​so the Hybrid EDC belt is more than up the challenge of supporting your EDC rig.

The Applied Gear Hybrid EDC belt is exactly what is promises - it's a hybrid i.e. a jack of all trades. It's not as thick and supportive as a true tactical belt, and it's not as discreet or easy to thread in and out of belt loops as a typical "fashion" belt, but it doesn't have to apologize for either shortcoming because it does everything pretty dang well.

We find ourselves leaning more and more toward gear that works for all occasions – it’s easier on the wallet and easier on closet space, too. The Hybrid EDC belt slots in nicely for that approach to gear. The belt’s under-sized COBRA belt buckle and 1.5” belt width let it fit the belt loops on pretty much any pair of pants you’ll ever encounter (in the men’s department, at least), which gives it a hefty leg up over many belts on the market. The double-layered fabric and plastic insert in the lining work as-intended, supporting heavy loads and keeping shape nicely.

At the range, the Hybrid EDC belt will support a holstered pistol on the right and a dump bag full of magazines on the left - that's really all we could ask for in a day spent ringing steel and punching paper.

Once you’re done at the range, the belt is just as happy heading out to dinner and a movie, and you can even sit down all day at a computer - we did it many times and didn't experience any discomfort (try that with your average shooting belt). The plastic insert and thick fabric keep your pistol right where you left it – we encountered zero sagging even at the end of a long day. Whenever we went for a draw, everything was right where we needed it. 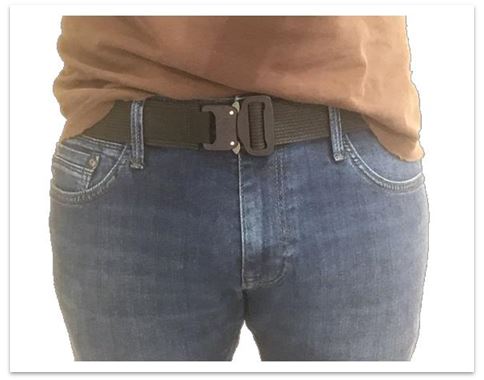 The Hybrid EDC belt doesn’t look out of place above jeans or other casual pants,
​even when paired with a french tuck that Tan France himself wouldn’t sneer at
All that good news said, we have to be realistic about the belt's fashionable limitations - you're going to struggle with business casual and above.

Chinos: not so much, and anything with a pleat is a hard no. 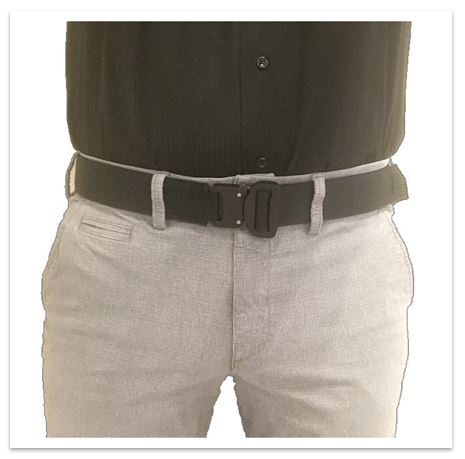 Pairing the Hybrid EDC with business casual looks a bit odd, and we don’t recommend it
EDC with business casual is already a tough row to hoe, and adding in the Hybrid EDC belt just looks a bit odd. Odd things draw attention - not a good outcome for your discreet EDC needs, but again, one belt just can't be all things to all people. On the other hand, if you don't have a job that requires dressing up, then the EDC Hybrid can be worn every dang day without issue.

For durability, it’s barely even a conversation. This thing is a tank. The steel COBRA belt buckle is known for being indestructible, and the fabric is all but invincible. We ran over the belt with a truck, just for grins, and dragged it for half a mile - it has some nicks in the steel afterward, but the belt clicked together just fine and the fabric was barely scuffed.

One thing to note about COBRA buckles, if you're new to the tactical/rigging belt world, is that they DO NOT unbuckle when they are under tension. That's the whole point - they're engineered to never, ever pop open, not matter how much weight they are supporting, even if it's your whole body weight and a buddy dangling from a rope hooked onto your belt. It’s a handy feature, but just remember that unbuckling is a two-handed affair - squeeze the two halves together and THEN unbuckle.

Once particularly clever point on the Hybrid EDC belt is the strap attaching the buckle to the belt - it's got play, enough that the buckle can twist and even fold. This lets it slip more easily though generic jean belt loops and gives you a little bit of room to stretch and twist without the super-stiff belt trying to hold you back. 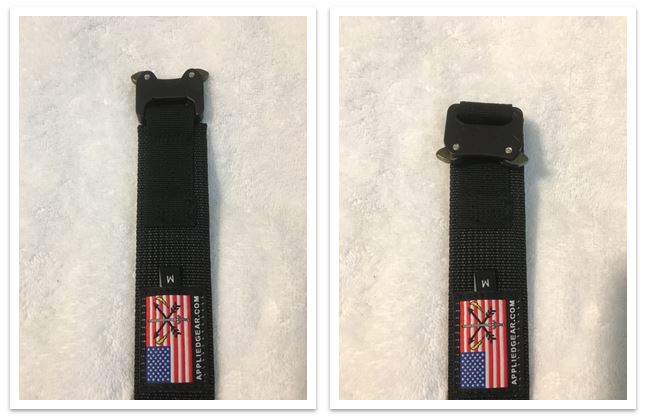 The flexible strap connecting the buckle to the belt permits a good amount of flexibility, which translate to a more comfortable belt.
Finally, let’s talk about the nemesis of every tactical belt – belt loops. The Hybrid EDC belt does fit through the belt loops on your average pair of Wranglers, but to be fair, it takes some practice. Cargo pants, carpenter's pants, or any other "work pant" tend to have generously sized belt loops, and these pants are no problem for the Hybrid EDC belt. However, most jeans, corduroys, etc. are a bit of the struggle. The belt does fit, which is why it has an easy leg up over almost all of other tactical belts on the market, but it can take some fenagling. Again, jack of all trades.

The Hybrid EDC Belt by Applied Gear is a rock-solid piece of kit. It supports your EDC rig, doesn’t draw too much attention, and it’s built to let you buy once and wear until you die (of old age, ideally). Smart features like the undersized COBRA buckle, not-too-big-and-not-too-small 1.5” strap width, and the flexible strap marrying the buckle to the belt all combine to make the belt surprisingly comfortable not just as a EDC belt, but as a general-purpose item. It’s a well-made and well-designed piece of kit, and even though it’s not the only belt you’ll ever need, it’s the one we’d want if we could only choose one.
And that’s it. Happy shooting.​
The contents of GunTweaks.com are produced for informational purposes only. Any modifications to a firearm should be performed by a licensed gunsmith only. Modifications may void warranties, create an unsafe firearm, and/or may cause injury or death. GunTweaks.com and its authors do not assume any responsibility, directly or indirectly, for the safety of readers attempting to use or misuse information, instructions, or procedures provided herein.
GunTweaks.com