To “bed” a rifle means to precisely fit the stock around the action (and sometimes the barrel, too). Two-piece stocks mount onto the firearm, rather than supporting the firearm as one-piece stocks do, so bedding is generally only useful (or possible) with one-piece stocks. The purpose of bedding is to tighten the imperfect fit between stock and action, which would otherwise allow the action to shift imperceptibly in the stock under recoil. Rifles that are not bedded are constantly enduring these slight changes in position, resulting in inconsistent flexing and vibration shot-to-shot, which in turn translates to less consistent groups and accelerated wear on the stock.


This article focuses primarily on bedding the action. For more details on the considerations for bedding the barrel, see our page on barrel harmonics.

There are several ways to bed a stock, and no one procedure is considered the best solution for all rifle types. In some cases, shooters combine two or more types of bedding in pursuit of the ultimate in stability and accuracy. Many different materials, tools, and procedures can be used, and many opinions exist on the respective benefits and costs associated with various bedding procedures. Below are overviews of the more common types of bedding, along with popular materials and guidelines for use.
Shim bedding

Shim bedding is the simplest form of bedding, and involves placing metal or plastic shims in the action and/or magazine inlets in the stock. Placing shims between the action and the stock spreads out the pressure of the action bolts more evenly, and prevents the action from digging into the softer wood or plastic of the stock. Most shims are steel but materials can vary, with aluminum, brass, and plastic shims all seeing use by various manufacturers and gunsmiths. Shims are generally stamped or cut to fit the stock inlet of a particular rifle, but simple steel washers from any hardware store have been used with some success.

Although few will argue that pillar bedding does nothing for shot-to-shot consistency, there are variations and preferences in the materials and procedure for pillar bedding.

In this style of bedding, the action is removed from the stock and an adhesive liquid is applied to contact points between the action and the stock. Fiberglass-reinforced resin is often used, hence the name “glass bedding”. The action and related parts are then coated with a release agent (a barrier against adhesives) and the stock and action are loosely screwed, taped, or rubber-banded in together. The adhesive will harden around the action, fitting the action to the stock very precisely. After the release agent is cleaned up, the newly-fitted action and stock can be bolted back together.

In some cases, the barrel may be completely or partially bedded in the same manner. This is more common with thinner barrels, as thicker barrels are rigid enough that free-floating the barrel from any contact with the stock will generally provide superior accuracy. 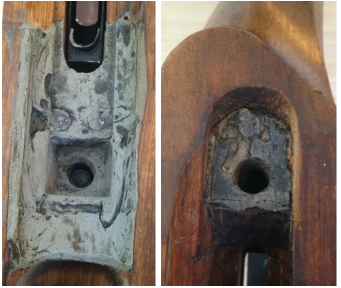 After years of use, the above bedding has been re-applied several times.
Skim bedding

Skim bedding is an evolution of glass/epoxy bedding. Once a bedding job has been in service for many rounds, the contact areas between the action and stock will compress very slightly, loosening the stock’s grip on the action and reducing accuracy. At this point, the action is removed and the contact areas are buffed to remove a thin layer of bedding compound and roughen the surface. The stock is then re-bedded using only a thin layer of bedding compound over the buffed surface, restoring the rifle’s accuracy. Some shooter’s theorize that because only a tiny amount of bedding compound is used, the relative amount of shrinkage that occurs as the bedding material hardens is reduced, forming a fit that is, in theory, tighter and more accurate than the original bedding.
Gluing

This is a bedding procedure with both fierce advocates and fierce opponents. Gluing is very similar to glass/epoxy bedding, except that no release agent is applied and the action and stock are literally glued together. Although this theoretically provides the ultimate in rigidity and stability, the adage “glued and screwed” is common, as glue jobs can go awry even under careful supervision. Any glue seepage into mechanical parts or improper alignment during the gluing can potentially ruin the performance or aesthetics of the entire rifle setup, or at the very least require the stock to be destroyed during removal. Additionally, rifles can occasionally shake themselves loose of their glue, potentially ruining performance in the middle of a competition or hunt.

However, gluing is nonetheless a common sight when rubbing shoulders with the most accurate rifles in the world. The renowned AW series of rifles are glued to full-length aluminum bedding blocks, and countless competitive shooters trust their glued rifle above all others.

What about the barrel?

There are generally three approaches to controlling how your barrel interacts with your stock, each covered briefly below. For a more in-depth discussion, see the barrel harmonics page.
Free-floating

The most common approach is free-floating the barrel, which means that the barrel channel is sanded or otherwise relieved around the contours of the barrel to prevent any contact between barrel and stock forearm. This is done to prevent the shooter's grip on the stock from applying uneven pressure to the barrel, improving consistency from shot-to-shot.
Pressure bedding

A less well-known approach is pressure bedding the barrel. A pressure bedded barrel has a small spacer inserted between the stock and barrel near the muzzle, applying a small amount of steady, upward pressure to keep the barrel position consistent between shots. This spacer can be anything from a simple strip of corkboard to a factory-installed spring between the stock and barrel.
Full-length bedding

A similar approach to pressure-bedding is full-length bedding of the barrel, using the same materials and procedure as for a glass/epoxy bedding of the action. This approach offers the strongest hold on the barrel and stiffens the rifle along its length, but can also add substantial weight. The decision to full-length bed or pressure bed is usually made on a case-by-case basis, as some rifles benefit more from one type of bedding than another.

Free-floating, pressure-bedding, and full-length bedding are all viable options, and no procedure can be considered “better” than the others because they are intended to see use on very different rifle types. Thick, heavy barrels are best served by free-floating, where the barrel’s intrinsic rigidity keeps it properly aligned and minimizes vibrations. The long, thin barrels often seen on surplus rifles often vibrate excessively when fired, requiring stabilization for maximum accuracy. Pressure bedding is best suited to long, thin barrels with full length stocks, while full-length bedding is often seen on long, thin barrels with half-stocks (stocks that stop roughly halfway down the barrel). Any of these procedures will yield a performance increase over a roughly-fitted stock that applies uneven pressure on the barrel, but each type of bedding will provide the best results when they are applied to the appropriate barrel type and stock configuration.
The contents of GunTweaks.com are produced for informational purposes only. Any modifications to a firearm should be performed by a licensed gunsmith only. Modifications may void warranties, create an unsafe firearm, and/or may cause injury or death. GunTweaks.com and its authors do not assume any responsibility, directly or indirectly, for the safety of readers attempting to use or misuse information, instructions, or procedures provided herein.
GunTweaks.com