Can the AR really do long range? 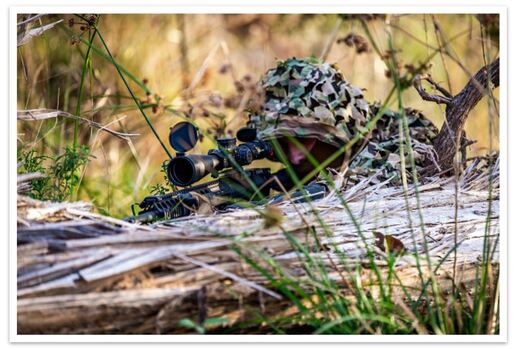 Can the AR really do long-range precision shooting?

Browse the website of any good gun shop like Primary Arms, and you’ll find huge, heavy HBAR barrels and $250 Magpul PRS stocks and all sorts of other long-range giblets. Some are largely decorative, but most are built for a serious and specific goal:  stretch out the AR-15 platform to the very tip of its effective range, and beyond.

Discussing long-range ARs is a bigger conversation than just which parts are best, and bigger even that examining the AR-15 platform’s specific limits and potential. One should also consider how a shooter sets goals, and how one can be realistic when making comparisons across different platforms or shooting capabilities.

​What is Considered Long-Range? 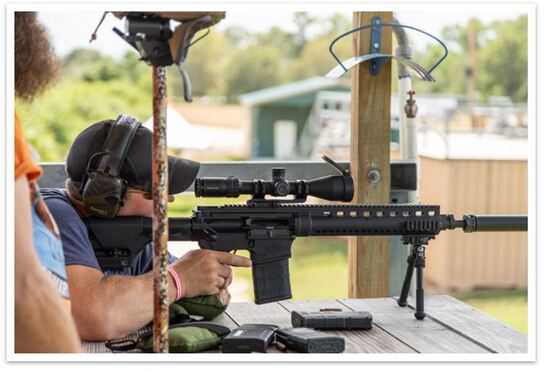 This question will get a wide range of answers, depending on who you ask. Those who grew up hunting in open prairie or in the desert, where shots can readily exceed 600 yards, would never say that a long-range precision shot would be anything less.

Those who grew up shooting in the woods, where maximum distance was determined by visibility through the foliage, might be comfortable claiming that 300 yd is a long-range shot.

Of course, many shooters will never get to take a shot beyond 100 yards, which is the length of their nearest rifle range. In that case, 150 or 200 yards is “long range”.

Finally, someone with a military background in precision shooting might consider long range to be somewhere between 1,000 and 2,500 yards.

The discussion gets more complicated than distance, too: what is considered an acceptable group size will vary widely:

One-quarter minute of angle or less means shooting a group that measures less than .250 inches across at 100 yards – depending on caliber, you may see “one ragged hole” in the paper target. This level of accuracy is typically not attainable for the average shooter outside of the occasional lucky grouping, since shooting such tiny groups on-demand requires enormous investments of time and money. Fortunately, most shooters will never need to achieve this type of accuracy. Simply because this level of accuracy is possible doesn’t mean it’s reasonable.

If you really have a hankering for accuracy, a 1/2 minute of angle is a more manageable (but still lofty) goal, particularly with the AR platform. For the bulk of shooters, however, a simple 1.0 MOA is sufficiently accurate to have a useful, enjoyable rifle, since 1.0 MOA equates to a 1-inch group at 100 yards or a 10-inch group at 1000 yards – plenty accurate for most purposes.

Ultimately, the question is not “what is considered long range” but instead, “what do you consider long range”, and only you can answer that.

​What are the actual numbers? 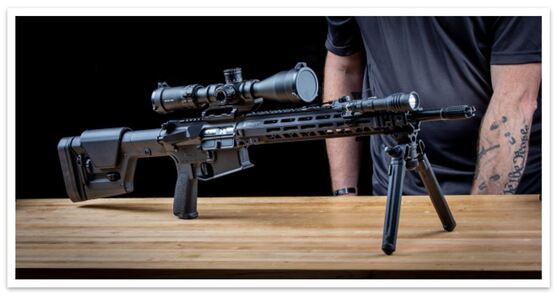 At this point in time, the AR platform (particularly the AR-10 and other 308 Winchester-based platforms of the AR), are capable of reaching 800+ yards with the right loads and (very expensive) build-outs. These builds will still lack the ultimate precision of a bolt action or a chassis-driven firearm that utilizes a monolithic receiver or frame setup, but they can produce “practical accuracy” out to around the 800 yard line.

For comparative purposes, this author has also seen a bone stock Savage Arms factory 110BA, chambered in .338 Lapua Magnum, shooting nearly a mile and a quarter (2200 yards) at nearly a minute of angle, consistently.

That rifle cost a mere $1800 or so, USD. For the AR, 2200 yards is nearly unheard of. To try and replicate that type of accuracy in an AR-10 or similar would cost 3 to 5x that amount (if even possible at all), and likely would not be able to fully utilize the value of the 338 Lapua, which has a lot of accuracy inherently built into the design of the cartridge.

For some perspective, the longest confirmed kill in military history with a .338 Lapua is 8120 ft; the longest with a 50 caliber BMG cartridge that is confirmed, is approximately 11300 feet, only just achieved In 2017, with the former record holding shot on the 50 BMG having been taken in 2002.

One could reasonably expect to spend more than $3,000 to get an off-the-shelf precision AR, which would then need to be fine-tuned with loads and potentially a barrel change or other component part changes to bring it up to the capability of shooting under a minute of angle at 800 yards.

Marching beyond 800 yards is possible, but expect to start spending somewhere around $6,000 trying to get that up to either a 1000-yard rifle, or down to ½ minute of angle at 800 yards.

It should be noted however, outliers do exist. The author, as a gunsmith, has built AR-15’s capable of shooting between quarter minute of angle and half minute up to around 500 or 600 yards. Additionally, the author has seen guns capable of shooting half a minute of angle to more than 800 yards on a relatively standard receiver-to-receiver fit for the AR platform. So, extreme accuracy outliers can and do exist, but in the grand scheme of things most of the capabilities of the AR platform really are within a somewhat tight range. 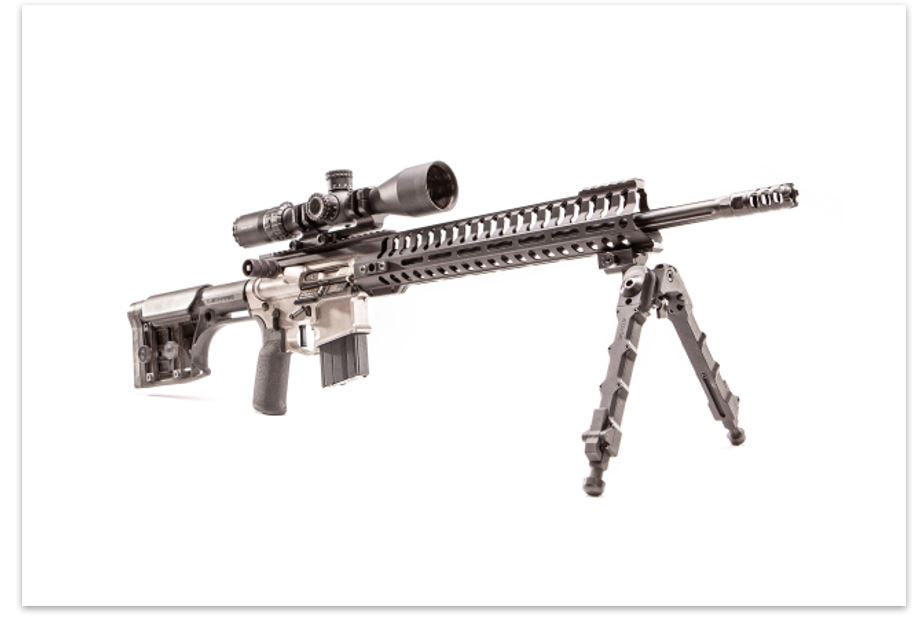 If you want a competition shooter, the 6.5 Creedmoor on the AR-10 platform is also an incredible opportunity for those who want to shoot to 1000 yards and need wind shearing capabilities.

Utilizing the AR-10, you open yourself up to the longer cartridges which can be up-loaded to shoot quite flat at long distances, while offering plenty of energy on target.

You can even find a one-off .300 Winchester Magnum, AR based rifle that will get you out to 1000 yards if you push it just a little bit, with terminal lethality trusted by major organizations like the Secret Service, or other elite law enforcement groups.

​Is the AR the Best Choice for Long Distance Shooting? 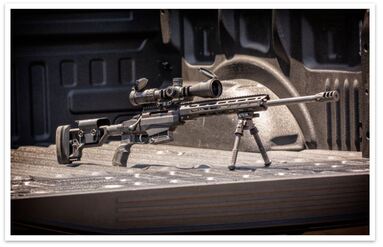 However, extreme accuracy is simply not within the core credentials of the AR platform, at least not as it was originally envisioned.

Subsequent improvements in component parts and a robust market offering for tuning and customization has allowed that level of accuracy to become a realistic target for the AR Market, but it still has some constraints based on the materials chosen for the receivers, the tolerances built into the mainstream component parts, and the fact that we haven't pushed it beyond the boundary where it is right now.

So, it comes down to this: if you need to shoot incredibly consistent groups at incredibly long distances every single time and not miss a shot, the AR-15 is not the ideal solution; neither is the AR-10, even if either one is built to the hilt.

If you need to accomplish those types of goals, save yourself a lot of money, heartache and time and go with a bolt action platform. It just makes more sense. This is especially true if you need to have a high caliber cartridge involved.

Anything larger than a 308, and you're going to have quite a bit of diminishing return when it comes to accurizing compared to a bolt action rifle.

Can I do it myself?

​To a point. The components exist, certainly the desire for many shooters to get to the level of highly accurate (at least sub minute of angle) with AR rifles at moderate or longer distances (more than 650 yd) exists, and the optics, add-ons and forums have sprung up to allow this capability to mature.

At a certain point, you will most likely need to involve a gunsmith or at very minimum, a premium barrel manufacturer, but most shooters will find that they can push their rifle beyond their own accuracy limits well before that point arrives.

Only you can decide how far you want to go - now get to building.
The contents of GunTweaks.com are produced for informational purposes only. Any modifications to a firearm should be performed by a licensed gunsmith only. Modifications may void warranties, create an unsafe firearm, and/or may cause injury or death. GunTweaks.com and its authors do not assume any responsibility, directly or indirectly, for the safety of readers attempting to use or misuse information, instructions, or procedures provided herein.
GunTweaks.com