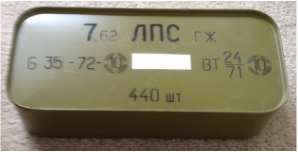 Corrosive ammunition is ammunition that leaves corrosive deposits in the bore and chamber after firing. “Corrosive ammunition” is not an entirely accurate term, since it is only the primer that has corrosive properties, not the entire cartridge. After a cartridge with a corrosive primer has been fired, a type of salt gets deposited everywhere that the combustion took place (bore, chamber, bolt face, etc). Rust and pitting form from the chemical reaction between the salt, water in the air, and the steel of your rifle, very much like salt on winter roads causes rust on the underbody of a car.

The villainous salt in this story is potassium chlorate, a chemical used in previous-generation priming compounds. Many firearms enthusiasts wrongly believe that the harmful deposits come from primer formulas involving mercury (mercury fulminate), but mercuric compounds are actually part of an even older (and even more damaging) ignition recipe dating back to the days of percussion caps and the very earliest centerfire cartridges. The corrosive downside of potassium chlorate was widely known and understood, but many militaries distrusted or could not afford the new (and more expensive) non-corrosive primer formulas, and continued loading their cartridges with corrosive primers into and beyond World War II. Today, it is essentially impossible for an American to encounter newly-manufactured corrosive ammunition, but billions of corrosively primed cartridges are still in circulation as military surplus.
How can I identify it?

Without an unrealistically thorough understanding of manufacturer headstampings from around the world, it is not possible to visually identify a corrosively primed cartridge. Fortunately, corrosive ammunition is only encountered (in America) as surplus ammunition, so there is no cause for concern if you purchase newly-manufactured commercial ammunition. If you do purchase military surplus ammunition, reputable vendors will clearly state when an ammunition they offer is corrosive. Avoid vendors that claim the ammunition is "partially corrosive" or "mildly corrosive", as these are marketing strategies that prey on the ignorant. A corrosive primer is a corrosive primer, much as a cow is a cow, and you cannot buy a "somewhat bovine" cow (as far as I know).
Is it safe to shoot with it?

Absolutely, but it is not advisable to shoot this ammunition in a firearm with a pristine bore. Mistakes happen, and if you miss even a tiny amount of the corrosive salts in your cleaning, corrosion will form and your bore will no longer be capable of its original accuracy. Chrome-lined bores will help slow the corrosion, but the bolt, muzzle device, and gas system (if present) will still be vulnerable.

That said, corrosively primed surplus ammunition is a fraction of the cost of new-production ammunition. Surplus ammunition in general has only average accuracy and usually comes in non-reloadable steel cases, but the incredible value is more than enough compensation. Only a few extra steps must be taken during the cleaning of your firearm to ensure that all the corrosive salts are removed. Some shooters also report more defective rounds (duds) per batch of surplus corrosive ammunition than would be present in fresh commercial loads, but failure rates are still rarely more than a few rounds in a thousand.
How do I clean it?

Corrosively primed ammunition has ruined many a good bore because traditional gun cleaners don't always have the chemical makeup to remove the corrosive salts, which will continue to corrode your firearm even if coated with a layer of protective oil. Check with your gun cleaner’s manufacturer before trusting that the job has been done.

Plain water is actually the best solvent to remove potassium chlorate (the salt), with solubility increasing alongside temperature (hot water cleans better), but water will cause its own rust if it is left in contact with unprotected steel. Ammonia-based cleaners and acetone are also potential solvents and acetone will not cause rust, but neither is as effective as water.  If there will be more than an hour or two between shooting and cleaning, the bore, chamber, and bolt face should be quickly rinsed with acetone. If acetone is unavailable, water, Windex or any other ammonia-based cleaner can be a substitute, but these are less preferable as they could cause rust if left for long enough.

To clean the salts off completely, simply flush the bore, chamber, bolt face, and gas system (if present) with very hot water. Follow the wash with your normal cleaning procedure, then wash in hot water again. Dry your gun carefully and apply water repellants and rust preventatives (WD-40 serves both of these purposes extremely well) to all parts that were exposed to water.

That’s it! Oil and store your firearm as normal.
The contents of GunTweaks.com are produced for informational purposes only. Any modifications to a firearm should be performed by a licensed gunsmith only. Modifications may void warranties, create an unsafe firearm, and/or may cause injury or death. GunTweaks.com and its authors do not assume any responsibility, directly or indirectly, for the safety of readers attempting to use or misuse information, instructions, or procedures provided herein.
GunTweaks.com