Crowning is the process of using a cone-shaped cutting bit to recess the rifling behind the end of the barrel, while leaving the barrel the same overall length. The goal of this proecedure is to protect the rifling from damage, ensuring that any abuse to the rifle’s muzzle falls on the outer edge of the barrel, while the rifling is left intact. The most common cut is an 11° crown, sometimes referred to as a “target crown”, although more severe angles such as 45° are sometimes encountered, especially in military rifles. A very shallow counterbore is sometimes employed instead of an angular crown. Note that crowning and counterboring are similar operations, but with different goals and tools. Crowning is a procedure used exclusively to protect the rifling of a new rifle and uses a cone-shaped drill bit, while counterboring usually serves to restore a measure of performance in a worn-out rifle and uses a cylindrical drill bit. 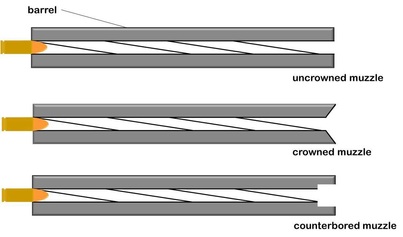