This article is part of a series on the M28-76 Mosin-Nagant, with comparisons to Chinese Type 53 Mosin-Nagant. Click the link to return to the full article: M28-76 Review

(The stock is arguably the most distinctive feature of the M28-76, and the design seems to have carried over (with some modification) to the TKIV 85. It is a heavy target stock of pale wood, almost certainly arctic birch, with a deep inlet for the turned-down bolt handle and bottom/side rails for sling and accessory attachment. The rails are Anschutz-style, which allow the position of the sling swivel (not present here)to be adjusted back and forth to accommodate different shooting postures. These rails are (or were) common on competition shooting rifles.

At any rate, the rails are attached by simple wood screws, and the bottom rail extends back over the magazine to allow the shooter brace their sling even with an extremely short (close to the body) grip on the rifle. This complicates the disassembly process, as the bottom rail must be removed in order to remove the magazine. For that reason, I almost never remove the magazine to avoid loosening the wood screws’ hold on the stock.

The stock features very full palm swells and an elevated comb, excellent features for target shooting while prone or on a rest. The comb supports the shooter’s head at just the right height for the aperture sight, and is high enough to allow comfortable use of a scope, if I was so inclined. The stock is set up strictly for right-handed shooters, but left-handed versions were available back when the M28-76 was first imported. They’re still around, locked up in gun safes across the country, so keep an eye on Gunbroker if you’d like one for yourself. The Type 53 has a straight grip and a simple hogback comb for use with iron sights.

The M28-76 stock is bedded at the front recoil lug and rear tang with what appears to be a pretty ugly bedding job, at first glance. However, the reason the bedding is not as smooth and form-fitting as most is that the stock provides generous clearance for the receiver on all sides. There is absolutely no contact between the stock and action other than the recoil lug and tang, thus free-floating the receiver and removing absolutely all shooter-induced pressure. The downside to free-floating the receiver is that the excess bedding compound doesn’t get squished nicely into shape, and simply dries on its own in somewhat ugly puddles. The Type 53 has no bedding of any kind.

Each of the M28-76's action screws is shim-bedded at either end of the magazine.  The front shim looks to be steel, while the rear shim(s) are brass. Both appear to bedded in place with epoxy. The Type 53 action screws (not shown) do not feature any shims. The M28-76 magazine assembly is also completely free-floating outside of the action screws, not touching the stock at any point along its perimeter. The Type 53 magazine assembly, on the other hand, presses against the stock on one side when tightened into place. 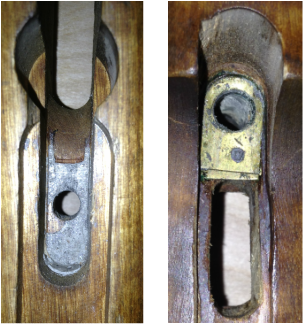 The M28-76 is not pillar bedded, which I found surprising. It seems unlikely that pillar bedding was skipped in order to cut costs, as little expense was spared in the accurizing of these rifles. More likely is that the Finns decided that somehow, the use of only shims and epoxy would be equally as accurate as shims, epoxy, and pillars together. I'll take their word for it.
Another commonality between the M28-76 and Type 53 is the use of recoil lugs, shown below. The M28-76's recoil lug appear to be a threaded bolt with two nuts on either end, while the Type 53's is a single nut with a bolt, as is common with Russian Mosin-Nagants. I will not remove the M28-76's recoil lug to verify, as recoil lugs are usually pressed in place and removing them can crack the stock.

Left: M28-76; Right: Type 53
Also worth noting is a small repair in the M28-76 forend where the stock began to crack. I initially thought the shiny spot was excess oil from cleaning, but it is actually dried resin. The crack was repaired by drilling several small holes into it, then filling the holes and surrounding area with resin. I have never seen this type of repair before, being more used to seeing cracked stocks repaired with wood screws and epoxy, but the repair seems to be holding up well. Admittedly, I do not shoot the rifle nearly as much as its previous Finnish owners likely did, so the long-term durability is still up for debate, but it is nonetheless an interesting approach to stock repair. 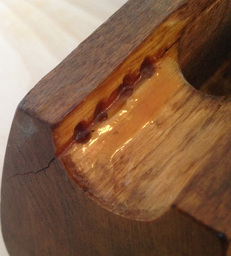 This article is part of a series on the M28-76 Mosin-Nagant, with comparisons to Chinese Type 53 Mosin-Nagant. Click the link to return to the full article: M28-76 Review
The contents of GunTweaks.com are produced for informational purposes only. Any modifications to a firearm should be performed by a licensed gunsmith only. Modifications may void warranties, create an unsafe firearm, and/or may cause injury or death. GunTweaks.com and its authors do not assume any responsibility, directly or indirectly, for the safety of readers attempting to use or misuse information, instructions, or procedures provided herein.
GunTweaks.com