This article is part of a series on the M28-76 Mosin-Nagant, with comparisons to Chinese Type 53 Mosin-Nagant. Click the link to return to the full article: M28-76 Review 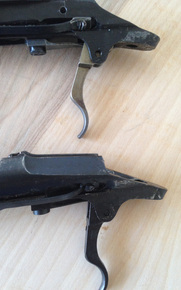 Top: M28-76; Bottom: Type 53
Unlike many Finnish Mosin-Nagants, the M28-76 trigger is a completely new Finnish design, not a modified Russian trigger. The Type 53 trigger (identical to a Russian M44 trigger) consists of the trigger body and sear spring, with the trigger body held in position by an axis pin. In the M28-76, the Russian axis pin is completely eliminated from the design (note the above picture, where the gold trigger housing is visible through the axis pin hole in the receiver), with the trigger supported only by the sear spring and some very tight machining (although the M28-76 trigger does have its own, smaller axis pin). This means the trigger is free-floating except for the spring. All travel and contact surfaces are smooth and slick, whereas the Type 53 shows rough machining marks on most surfaces. The M28-76 trigger is also noticeably heavier in the hand compared to the Type 53’s trigger, although the pull weight is much lighter. 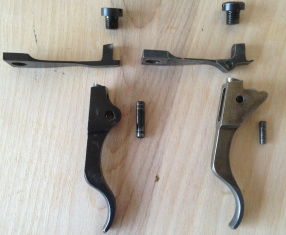 The M28-76 sear spring has an added hole for the axis pin. This axis pin does not support the trigger like the Type 53's, instead serving only to provide a pivot. The sear spring engagement surface is smoothly ground and beveled to reduce contact area, whereas the Type 53's sear is a simple ramp. The M28-76's sear is ground lower than the Type 53's, providing a lighter and shorter throw. In an ordinary Mosin-Nagant, grinding down the sear ramp provides a better trigger pull, but also increases the risk of accidental discharge. The M28-76 addresses the issue of trigger safety with an elegant solution, detailed below.

Type 53: left; M28-76: right
The M28-76 trigger housing has an extended, ridged rear. The rear ridge acts as a second pivot point (second stage) during the trigger's travel. The first stage is takeup against the sear spring while the trigger pivots on the axis pin.  The second stage occurs once the rear ridge of the trigger bottoms out against the receiver, at which point the trigger has pivoted enough to allow the sear to almost release the firing pin catch. Because the trigger is now stopped by a physical barrier, there is not possibility of creep. With the rear of the trigger bottomed out, the axis pin is removed from the equation and any further movement will lower the trigger, which by now has such a delicate grip that the firing pin is released immediately.

By contrast, the Type 53 is a linear, one-stage design. The trigger simply pivots on the axis pin until the trigger sear lowers enough to release its grip on the firing pin catch.

Installed, the M28-76 trigger is a smooth, light two-stage. Travel is long by “target” trigger standards, but not unusual for a two-stage. Lacking a trigger gauge, I would estimate that the travel is about two pounds, and the break is at about three pounds. There is no question about where the “wall” is, as the trigger resistance spikes instantaneously and without creep. Slop and breaking creep are absolutely non-existent, although there is some overtravel. In general, the trigger is delightful, a completely different animal from the Russian design. Having owned both a Timney Mosin-Nagant trigger and the M28-76, I would say the two triggers are on equal footing for overall quality, although the two have extremely different characteristics, with the Timney being an ultra-competitive single stage and the M28-76 being a practical yet incredibly refined two-stage.


Which leads me to a cautionary tale. There are reports of M28-76s being “stripped” of their triggers (and sometimes sight assemblies) and re-sold with standard Russian components. Use caution when buying online.

This article is part of a series on the M28-76 Mosin-Nagant, with comparisons to Chinese Type 53 Mosin-Nagant. Click the link to return to the full article: M28-76 Review
The contents of GunTweaks.com are produced for informational purposes only. Any modifications to a firearm should be performed by a licensed gunsmith only. Modifications may void warranties, create an unsafe firearm, and/or may cause injury or death. GunTweaks.com and its authors do not assume any responsibility, directly or indirectly, for the safety of readers attempting to use or misuse information, instructions, or procedures provided herein.
GunTweaks.com