Introduction to the AR 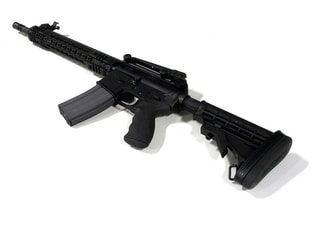 An AR platform rifle, often simply called an AR, is a firearm modeled after the AR-10 and subsequent AR-15 rifles. The AR-10 in 7.62 NATO was developed first, and quickly gained acceptance for being lighter, cheaper, and more controllable under automatic fire than its competitors. However, the heavy-hitting 7.62 NATO round was on its way out as a standard infantry cartridge around the time of the AR-10's development in the late 1950s. Thus, the AR-10 was redesigned around the smaller 5.56 NATO and became the AR-15, a design which was accepted (with some modifications) as the standard service rifle of the United States military and given the military designation "M16".

Although the M16 was light, accurate, and had lowrecoil, the first few batches had teething problems and suffered from frequent malfunctions, a problem that was magnified by the insufficient training initially supplied to the troops who received the weapon. This initial wave of bad press paved the way for the long-standing but incorrect public perception of the M16 (and all ARs, by extension) as an accurate but inherently unreliable design.

In truth, comparing the AR to other modern infantry rifles reveals an unusually lightweight design with slightly above-average accuracy and satisfactory reliability, bearing in mind that “satisfactory” reliability for a general-issue infantry rifle is still quite exceptional. It’s true that many other modern infantry rifles will easily best the AR in a no-holds-barred dust and grit torture test, but it’s also true that the military AR is still more reliable than most rifles in the average gun store today. The same cannot be said of the civilian AR, and therein lies the fundamental problem that has helped keep the myth of the “unreliable AR” around to this day. In a military setting, the AR is fine. In a civilian setting, it is often not fine. In a nutshell, here’s why:

Military ARs almost exclusively fire high-quality brass-cased ammunition. As long as the AR is fed quality ammunition, it is a completely reliable system. In this article from TheLuckyGunner, a completely factory mid-range AR (from DPMS) fired 10,000 rounds of good quality brass-cased ammunition in a desert environment, with only one thorough cleaning, and did not have a single failure. Hard to argue with that.

Within a civilian shooter’s life, however, all bets are off. There are dozens upons dozens of different manufacturers of civilian ARs, and dozens of different types of 5.56 and .223 that are fed to them. The AR does not tolerate these variances well, and is especially intolerant of the civilian tendency to buy the cheapest ammunition they can find. Cheap ammunition in civilian rifles is the single biggest reason that the myth of the AR’s unreliability lives on. As a military weapon, fed a standardized diet and built by knowledgeable professionals, the AR is more than enough gun for the modern soldier. As a civilian rifle, its reliability can be somewhat lacking, particularly in the hands of the “average joe” with limited funds for both the firearm itself and the ammunition to feed it.

ARs are commonly understood to operate using direct impingement, but actually operate on a principle known as gas-expansion, which differs from direct impingement in that it relies on a buildup of gas pressure to push the O-ring sealed bolt, which also requires that the system meter the gas incoming from the barrel. Gas-expansion is actually quite different from direct impingement, a fact even noted by the AR-10/15's inventor Eugene Stoner in the text of the system's patent (lines 48, 49; U.S. Patent 2,951,424). Direct impingement systems (like the excellent but largely forgotten French MAS-49) simply vent gas directly onto a cutout on the bolt carrier to push it backwards, and do not operate on pressure buildup and therefore require no O-rings or sealing elements, and do not necessarily require metering of the gas from the barrel.
​
Despite the differences, the gas-expansion system reaps many of the same benefits of traditional direct impingement systems, such as low weight (there are very few parts) and improved barrel harmonics (very little is attached to the barrel), but combustion by-products are carried directly into the bolt body of the firearm along with the high-pressure gas, so the action is fouled much more quickly than in systems where the bolt and gas are separate (such as in AK-pattern rifles). Some critics of the system characterize it as "shitting where you eat", however, a quality AR will still provide acceptable reliability as long as it is fed quality ammunition and cleaned regularly.

In 2004, some American special forces units replaced their AR carbines with HK416s, which are modified ARs made by the German company Heckler and Koch (H&K). H&K eliminated the gas expansion system and replaced it with a piston system, greatly increasing reliability and durability but adding weight (a HK416 weighs the same as a modern AK) and expense. A number of companies now offer piston ARs or conversion kits, though H&K was the first to do so and their kit is arguably the gold standard of piston-drive ARs. Although piston systems can greatly elevate the AR's service life and reliability, with some manufacturers claiming their gas-piston AR is as reliable as an AK, the cost differential between a gas-piston AR and an AK is often staggering; the Russian government buys a new AK for about $200 while the HK416 sells for over $3,000.

Unlike the AK, however, the AR is a modular firearm. A single lower receiver can support many types of upper receivers, so caliber swaps can be as simple as pushing a few pins and swapping the upper. Rails and accessories can be mounted just about anywhere, and most parts can be swapped or replaced with basic hand tools. A single AR can go from being an infantry gun to a support weapon to a precision rifle and back again without using a single power tool, whereas an AK would require a small machine shop to perform the same feat.
Why its good:

A well-built AR is a lightweight and accurate platform, limited only by the effective range of the cartridge it fires. While not quite as accurate as a quality bolt-action rifle, the AR platform is still more accurate than most shooters, so the difference will likely never be noticed. The gas-expansion system greatly reduces felt recoil, and the straight-line stock cuts down on muzzle rise. Modularity is off the charts; if you plan appropriately, you can build pretty much any kind of gun you want. Magazines are cheap and plentiful in many capacities, rail mounting systems practically grow on trees, and there is a truly mind-boggling selection of grips, stocks, and forearms to allow the end user to customize their AR to perfectly suit their needs and desires.
Why its bad:

After 50 years of hard learning, a modern AR from a quality manufacturer is a reliable, combat-worthy weapon. However, the AR platform just doesn't have the baseline reliability of other military designs, a flaw that is glaringly apparent when taking budget or mid-range ARs out into the uncertain wild. To avoid this muss and fuss, expect to spend about $1,000 dollars on a "good" AR, whereas $500 is more than adequate for an utterly reliable AK-pattern rifle (even if it is a little rough around the edges). If you want a truly high-performance AR with all the sights and gadgets, one that performs regardless of the environment or weather conditions and is customized to your exact preferences... well, it's either that or a used Hyundai.
The contents of GunTweaks.com are produced for informational purposes only. Any modifications to a firearm should be performed by a licensed gunsmith only. Modifications may void warranties, create an unsafe firearm, and/or may cause injury or death. GunTweaks.com and its authors do not assume any responsibility, directly or indirectly, for the safety of readers attempting to use or misuse information, instructions, or procedures provided herein.
Photo used under Creative Commons from simonov
GunTweaks.com