This page is Part 2 of the Magpul MOE vs Magpul SL vs B5 Keymod vs BCM PKMR: Drop-in Mid-length Handguard Comparison. Click the link to return to the first article: Part 1.

The (good) bottom line: Appearing roughly a decade after the successful MOE handguard was launched, the SL handguard is noticeably slimmer and longer than the standard MOE and incorporates a front lip to protect you from the hot gas block, allowing a far-forward C-clamp or thumb-over-barrel grip, yet still comes in weighing a tiny bit less than the original MOE. The rectangular cross-section accommodates a side or bottom grip on the rifle equally well, and M-LOK slots at the 2, 6, and 10 o-clock positions allow for all needed accessory attachment. Final polishes includes quite a bit of functional and attractive design, from the lips that cover the delta ring assembly to the offset vents on top of the handguard which keep heat mirage out of the line of sight, and there's even a textured strip at the true 12 o'clock position to prevent glare in direct sunlight. The odds are good that the SL was designed by people much smarter than you, who shoot a lot more than you do. It's comfortable for all shooting styles, versatile, comparable in weight to a standard handguard, and not all that much more expensive than the competition.
Top view at right: note the offset vents and textured top strip, which help prevent both heat mirage and glare from impacting the sight picture.
The bad bottom line: Although the SL might represent ten years of accrued knowledge at Magpul, it's more likely that it actually just a shiny new toy to boost sales. It incorporates many small improvements, but almost none seem to be directed at an apparent problem with the existing MOE handguard. It's the priciest entry in our lineup, yet it is neither the lightest, slimmest, nor the most versatile (all three titles go to the B5 handguard), and it's tough to prove that it's any more durable than the competition. So if it's comfortable, versatile, and smartly designed, but so is the original MOE, then what exactly are we paying more for?

The (good) bottom line: In typical BCM fashion, the PKMR maximizes practicality while minimizing weight and bulk, a seemingly simple design philosophy that nonetheless eludes many other manufacturers. It's a no-fuss design that might strike the most perfect balance of utility, size, and comfort of any handguard shown here. In many respects, the PKMR is similar to the Magpul MOE; it has accessory mounting slots in similar locations, and nearly the same grip shape with a wide, supportive swell for the palm on bottom and a narrow, pointed top to allow the fingers to pinch together and lock the handguard into the shooter's grip. However, the PKMR is substantially slimmer and lighter than the MOE handguard, a simple but notable improvement on an already well-loved design. The PKMR has the most pronounced front lip of any of the handguards, handy if you like a far-forward, push-pull hold on your rifle, and features aggressive texturing on the sides that slice through any water or sweat to ensure a firm grip. The keymod slots have reinforcing ribs on the inside to allow mounting of stressed components like vertical grips, addressing complaints regarding the durability of plastic keymod attachments that have plagued earlier designs.

View at right: The PKMR is unique in that it uses a three-piece design. 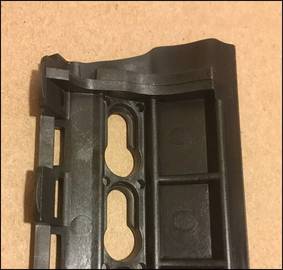 The PKMR's keymod slots are reinforced with plastic ribbing.
​​The (bad) bottom line: The Magpul SL handguard can somewhat justify its high price through a unique design and grip profile. The PKMR, on the other hand, tops even the SL for price, yet it might be tough to prove that it brings measurable benefits over the less expensive and very similar Magpul MOE.  The PKMR is admirably slim and light, but if you want the slimmest, lightest handguard around, the PKMR still falls far short of the B5 Keymod. All totaled, potential buyers may find themselves without a hugely compelling reason to spring the extra cash for the PKMR over the B5 Keymod or Magpul MOE.

Additionally, some shooters prefer a side-clamp grip on their rifle's forearm, and the PKMR is the least amenable to a side-clamp grip of all the handguards due to the ridged spine that covers the gas tube (this ridge is necessary to accommodate PKMR's minimalist profile). While not a dealbreaker when shooting with gloves and/or with light-recoiling calibers, this ridged spine chafes and rubs at the shooter's thumb when drillling without gloves or when chambering "thumpier" cartridges like 7.62x39. So while the PKMR is built solid as a rock and offers improvements to the well-loved MOE handguard, it is also the most expensive and is in fact the least versatile of all the handguards with respect to accommodating a side-clamp grip on the forearm.
Conclusion

We don't really believe in choosing a "winner" at the end of a comparison like this. These are all well-made handguards, but their design philosophies are simply very different, and any recommendation we would make depends solely on your shooting habits.

If you want a light, hard duty rifle, the B5 handguard is probably the best choice. It does what you need at minimal weight, bulk, and cost. That's high speed, low drag if we ever saw it. The Magpul MOE might be best for a shooter who spends a lot of time prone or squatting, a shooter who will appreciate a big, comfy palm grip that's well-suited to careful, off-hand shots. The BCM PKMR is an excellent all-arounder, as long as you don't want a side-clamp grip. Many a shooter has loved the Magpul MOE, but wished it was a little slimmer, so the PKMR might be the best of all worlds combined. The Magpul SL is likely the most versatile and comfortable of all the handguards - it's neither the lightest, slimmest, nor the cheapest, but it  is a superb performer for just about any shooting grip you can imagine.

In the end, all of these handguards beat the pants off the chunky, heavy, round plastic handguard that probably came on your AR.

Happy shooting.
The contents of GunTweaks.com are produced for informational purposes only. Any modifications to a firearm should be performed by a licensed gunsmith only. Modifications may void warranties, create an unsafe firearm, and/or may cause injury or death. GunTweaks.com and its authors do not assume any responsibility, directly or indirectly, for the safety of readers attempting to use or misuse information, instructions, or procedures provided herein.
GunTweaks.com