​At GunTweaks, we try to put every handgun we review through a standardized reliability trial we simply call the “dirt test”, which in simplest terms involves chucking the pistol in the dirt and seeing how many shots it takes to behave normally afterwards. For a long time, the Glock 17 Gen 4 has been the king – it had only one, single malfunction before it shot clear. When we got our hands on a Sig Sauer P320 Carry to review, though, we were eager to see if it would unseat the Glock. We recently made some edits to our dirt test methodology, ditching regular dirt and using diatomaceous earth (DE) instead, so we needed to re-test the Glock anyway. Since we had the P320 on-hand too, it only seemed natural to test them at the same time in a head-to-head.

The first of many malfunctions for both the Glock and the Sig.

The two pistols were dirtied up using DE and tested twice, once dry and once after being dunked in water.

In the dry test, the Sig and Glock each showed strengths and weaknesses, but were essentially neck-and-neck. The Glock racked up 9 malfunctions, losing to the Sig which only tallied 5 malfunctions. The Sig bested the Glock again by only taking 4 shots to shoot clear, whereas the Glock required 8 shots.

However, the Sig suffered a major malfunction where the slide locked back and would not release – the gun needed to be smacked around quite a bit to get it working again. The Glock, although it malfunctioned more often and took longer to shoot clear, did not suffer any ‘showstoppers’ like the Sig’s locked slide, so we consider the two guns to be on relatively equal footing as far as the dry test. Additionally, a significant amount of DE was shaken free from the Sig’s internals while smacking it around to get the slide to unlock, and this may have helped the gun shoot clear in 4 shots when the Glock, which did not get smacked around, took 8 shots.

The Glock and Sig prepare to begin the dry test
In the wet test, both guns did much worse. The Sig malfunctioned 15 times in the first magazine, though it again beat the Glock which malfunctioned 18 times, although neither gun shot clear. However, the Sig experienced 3 major malfunctions (the slide repeatedly locked closed on an un-extracted casing), requiring quite a bit of smacking around to get it working again each time. In contrast, the Glock once again did not have any major malfunctions.

We gave each gun another 5 rounds for a shot at redemption in the wet test and the Glock began to pull ahead, clocking in only 3 malfunctions versus the Sig’s 5 malfunctions. However, once again neither gun managed to shoot clear.
​
We decided to give the guns a tiny shot of something a little hotter: 5 rounds each of Federal Syntech Defense 138gr HPs. Amazingly, the formerly temperamental guns both shot all five rounds without a single hiccup. Now we were too curious to stop, so we discussed and settled one final “challenge” run: 5 rounds each of aluminum-cased Federal Premium FMJ, since aluminum isn’t quite as slick as brass but both guns had eaten that particular ammunition very happily in the past. The Glock solidified its lead over the P320 with yet another clean string of five shots, while the P320 had two malfunctions on the aluminum-cased FMJ.

At that point, we concluded testing.

Note: Malfunctions are broken down into failure to achieve battery, failure to extract, failure to eject, and failure to feed in the raw data tables at the bottom of the article. Detailed info on test prep and methodology, as well as more pictures taken during the test, are also provided further down.

It's impressive that the guns functioned at all.

In the sum total of all shots fired, the Sig bested the Glock by malfunctioning 27 times, whereas the Glock malfunctioned 30 times. However, due to the Glock’s complete lack of major/showstopping malfunctions, and the fact that the Glock eventually shot clear (10 shots without failure between the Federal Syntech and aluminum-cased FMJ) while the Sig did not, we conclude that the Glock 17 takes the win over the P320 Carry with respect to reliability in dust and mud.

At the end of testing, we also considered using Winchester Forged steel-cased FMJ instead of aluminum-cased Federal Premium, but decided against it since the P320 had choked on that ammunition even when clean. This further cemented the Glock’s position as the winner in overall reliability - the Glock eats everything the Sig eats, plus it eats Winchester Forged without a problem.

However, it is worth noting that the difference in actual reliability was not especially dramatic. Food-grade DE is both mildly abrasive and incredibly, incredibly fine, and therefore much more impactful to a gun’s function than any dust or silt that could be encountered normally. It is quite possible that in real-world usage, with real-world dirt, the Glock’s edge in reliability would be difficult or even impossible to notice (unless you want to shoot Winchester Forged, of course).

The winner (by a slim margin): Glock 17
​
Notable finding: Neither gun had any light strikes, or failures to ignite of any kind. If this test didn’t cause a blockage in their striker channels, it is doubtful that anything ever will.
​
Notable finding: Federal Syntech Defense 138gr HP could be a great self-defense round from a reliability perspective – it instantly turned the guns from hot messes to smooth operators. However, it’s also possible than any decent self-defense ammunition would do just as well. Additional testing is needed to say for sure. 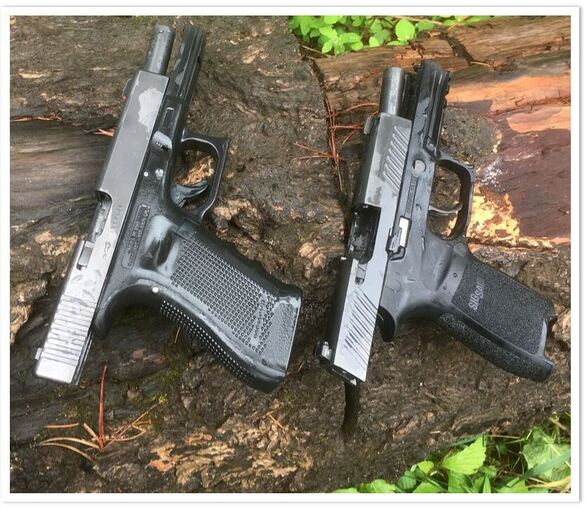 After cleaning in between the dry and wet tests.

​The oil used was a personal concoction by one of our staffers: a 50-50 mixture of motorcycle oil and automatic transmission fluid (both full synthetic), and the grease was Battle Born© firearms grease.
​
Immediately prior to testing, each pistol was fed a 10-rd magazine of brass-cased FMJ target ammunition to ‘wake it up’.

Differences from Previous Dirt Tests
Previously, the GunTweaks Dirt Test was carried out using a fine, silty dirt taken from the backstop berm of a nearby shooting range. However, we got tired of our supply of dirt being buried under snow in the winter, and furthermore we wanted anyone, anywhere in the country, to have access to the exact same dirt for testing purposes.
​
We considered several “dirt” options and settled on food-grade, freshwater-mined diatomaceous earth (DE), since it is consistent in particle size and composition across brands (unlike bulk sand or dirt) and acts as a mild abrasive (unlike talc powder). Plus, it’s mined right here in the USA.

Test Method – Part 1 (dry)
Drop the (unloaded, but with an empty magazine in place) gun into a flat-bottomed container filled with approximately 2 inches of DE. Drop the gun twice on each side (four times total) to force some DE into the nooks and crannies. Then, scoop up a heaping handful of DE and pour it over the action, once on each side, to make sure everything is nicely coated.

Once the gun is pulled from the DE, drop the empty mag, load a full mag, rack, and fire. No cleaning is allowed, not even dry-racking the action. Fire as many shots as is required for the gun to “shoot clear” i.e. fire a string a shots without malfunctioning, or until you run out the magazine, in which case the gun has failed the test.
​
The weapons are only fed factory-loaded, brass-cased FMJ ammunition.
​
Test Method – Part 2 (wet)
The test method for part 2 is identical to part 1, with the exception of the gun being cleaned in water in between. The gun is immersed in a bucket of water while the slide is racked and trigger pulled at least ten times. This cleans the DE from Part 1 out of the mechanism, allowing a second trial to be run without needing to go home and completely clean the gun beforehand. If desired, you may also repeat the wet test as many times as needed by simply dunking, cleaning, and dropping the wet gun back into DE as described above. 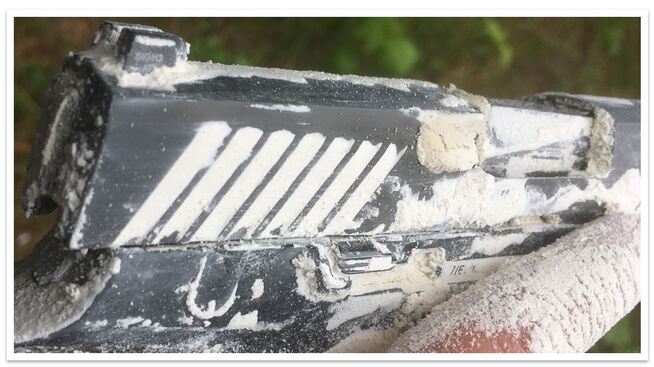 Check out the DE mud caked around the extractor and ejection port during the wet test. 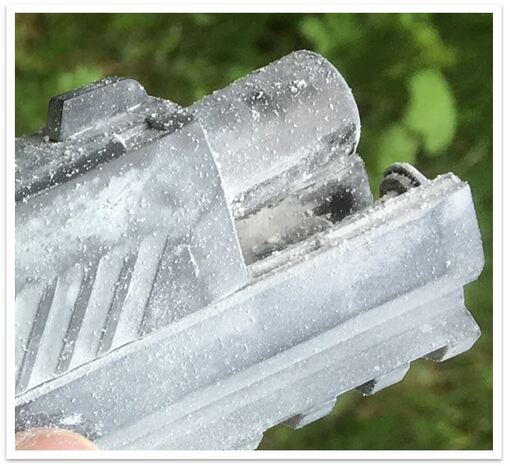 The Glock (left) and Sig (right) breech areas immediately after finishing the dry test.
​Somehow, the guns were back to shooting normally when this picture was taken. 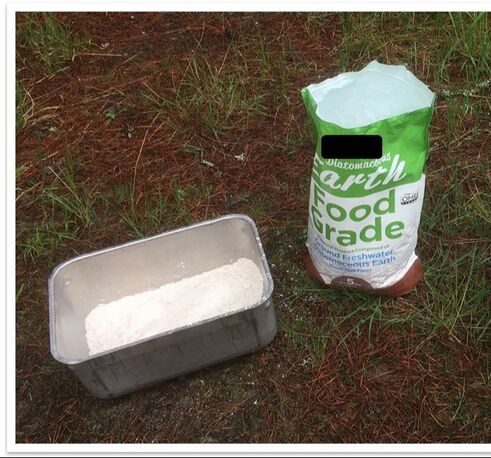 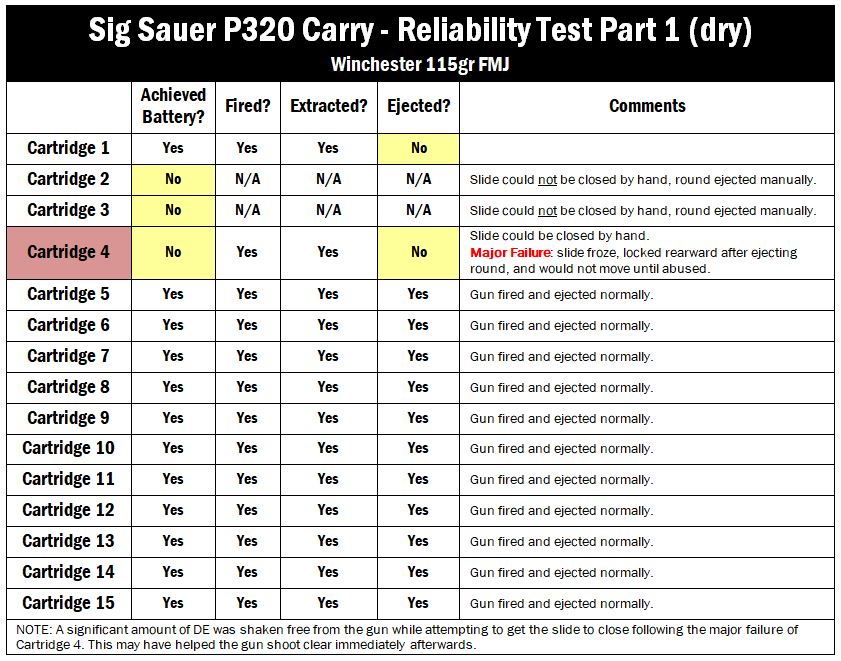 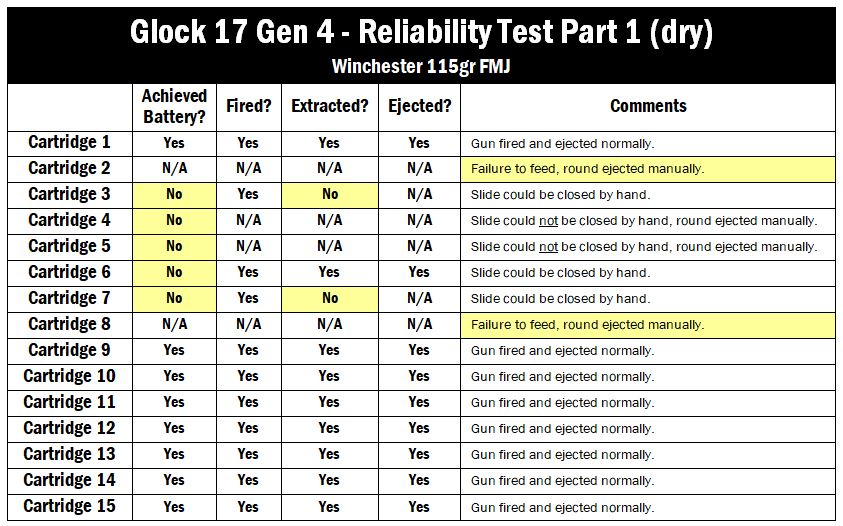 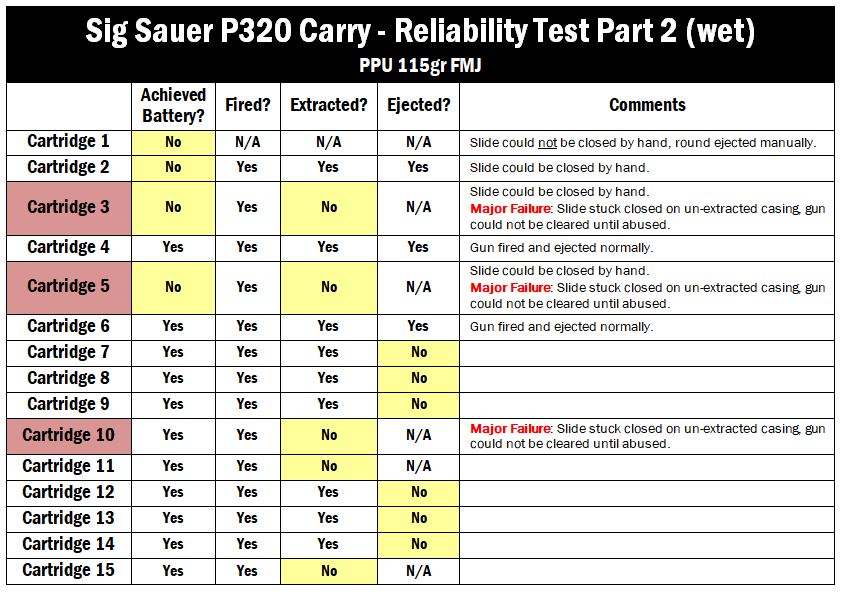 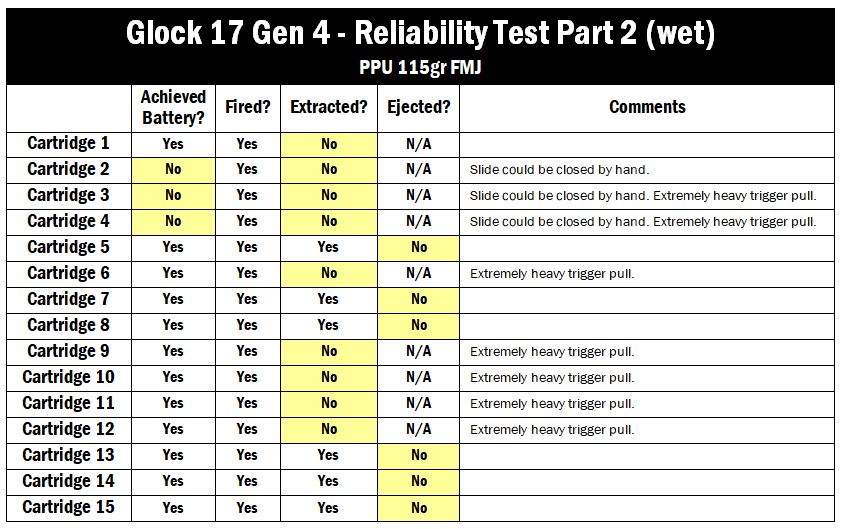