Weaver vs. Picatinny vs. Dovetail

The terms rail, mount, and base are all used interchangeably.

A rail allows the shooter to add a sight or accessory to their firearm, and there are many types of mounting rails on the market today, from 3/8" dovetail mounts to mil-spec Picatinny rails to the slew of proprietary rails used by individual manufacturers. Much to the chagrin of the modern shooter, very few of these styles are interchangeable and some styles are just about impossible to differentiate by eye. Luckily, there are only three main styles to worry about: 3/8" dovetail rails, Weaver rails, and Picatinny rails make up the lion's share of the market, and all other styles are either antiquated or manufacturer-specific, and beyond the scope of this article.

Most modern firearms incorporate at least one type of mounting rail into their design, or are constructed such that a mounting rail can be installed without too much effort. On rifles and shotguns, a rail is usually placed above the receiver for mounting a sight, while handguns will usually have a rail under the barrel for mounting a flashlight or laser sight. The style of this rail can vary between manufacturers and even between models, as a "traditional" model .22 rifle may have a 3/8" dovetail mount while a "tactical" version of the same rifle may feature a Picatinny rail in the same place. If you are uncertain, it is always a good idea to check with your manufacturer before purchasing a sight or accessory to ensure that your new purchase will fit your firearm's rail. However, a little bit of knowledge can go a long way, so below you'll find explanations of the appearance, usage, and limitations of the three most common styles of rail.
3/8" (9.5mm) dovetail, "tip off" rail

3/8" dovetail rails, sometimes call tip off rails, consist of two thin parallel grooves and are used almost exclusively on rimfire rifles and air rifles. 3/8" dovetail rails are a common, standardized style within the rimfire industry and are inexpensive to machine into the firearm's frame.

Weaver rails and Picatinny rails are visually similar but are not always interchangeable. Although both rail types have slots cut perpendicularly across the rail (recoil grooves), both the size and spacing of these slots differs between Weaver and Picatinny rails.

Weaver rail slots are 0.18" across and there is no standard measurement for the spacing between the slots. Weaver accessories are thus designed to be flexible in terms of slot spacing, with the most common example being scope rings, which can be placed at many points along the scope's body to accommodate the unevenly spaced Weaver slots. Weaver slots are also smaller than Picatinny slots at .180" (Picatinny rail slots are .206"), and for both of these reasons, accessories intended for a Weaver rail will fit a Picatinny rail. However, when installing a Weaver accessory on a Picatinny rail,  slot the accessory's crossbolt in the recoil groove and then push all the way to the front before tightening, to ensure that the smaller 0.180" crossbolt does not creep forwards in the groove as the firearm recoils.

Picatinny rails are also called tactical rails and MIL-STD-1913 rails. Some Picatinny rails have a center groove cut down the length of the rail, but this center groove is not specified in MIL-STD-1913, the government standard which governs the specifications of Picatinny rails, which can be found here. The purpose of this center groove is to allow the routing of wires under a rail cover to support flashlights or other electrical equipment, and occasionally to allow the use of iron sights on weapons where the top rail's placement interferes with the sight picture.

Picatinny rail slots are 0.206" across and the slots are spaced evenly at 0.394" center to center. As a result, Picatinny accessories require the slots to be uniformly spaced, so they will usually not fit on Weaver rails. However, many scope rings that market themselves for use on Picatinny rails use a crossbolt sized for the smaller 0.18" Weaver rail, so that they can be used on both Weaver and Picatinny rails interchangeably. These mounting systems should be slotted into the recoil groove and then pushed all the way to the front before tightening to ensure that the smaller 0.18" crossbolt does not creep forwards in the groove as the firearm recoils. 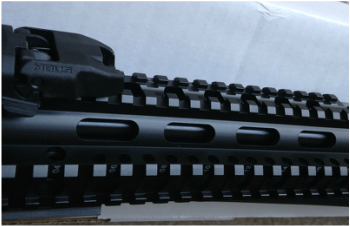 Picatinny rails on a quad-rail, with attached sight. The center groove seen here is not always present.
The contents of GunTweaks.com are produced for informational purposes only. Any modifications to a firearm should be performed by a licensed gunsmith only. Modifications may void warranties, create an unsafe firearm, and/or may cause injury or death. GunTweaks.com and its authors do not assume any responsibility, directly or indirectly, for the safety of readers attempting to use or misuse information, instructions, or procedures provided herein.
GunTweaks.com