Modifying a military surplus firearm for civilian use (target shooting, hunting, etc) is known as sporterizing. Pistols are not frequently sporterized, although they are often refinished. Conversely, rifles are sporterized quite frequently, with the sporterizing procedure usually involving fitting a scope and a recoil pad, and shortening the barrel to around 20-24 inches (if necessary). Reasons for doing this vary, as some shooters enjoy coaxing maximum performance from the old warhorses of history, often with astounding results, while others use inexpensive surplus firearms as practice sessions for sharpening their gunsmithing skills. For less financially fortunate citizens, military surplus offers access to cheap, effective firearms for hunting and self defense, and these firearms are often slowly modified over time to increase their usefulness and performance. 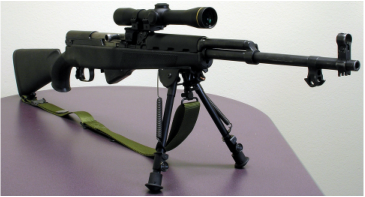 This SKS has been inexpensively sporterized by adding a waterproof synthetic stock and a scope. The bayonet has also been removed to improve barrel harmonics.
Purists argue that military surplus firearms should never be modified, they as are pieces of history and should be treated with respect. The counter-argument is that as long as at least one example exists in a museum collection, the history of the firearm is preserved. Requiring historical accuracy in your personal collection is fine and admirable, but insisting that others do the same is an unusual demand considering the history of sporterizing in America, which stretches back to the very founding of our nation. Muskets and rifles fired in the Revolutionary War put food on the table in the lean years of our new nation, and that tradition of military-to-civilian conversion has rightly continued into today. In the America of only a few decades ago, there was no finer base for a custom rifle build than an original Mauser action, preferably Swedish. Lee-Enfield actions remain popular hunting rifles in Great Britain, Swiss K-31s with expensive target sights litter collector's cabinets the world over, and in the 1970s a company called Vostok used the Mosin-Nagant to build target rifles that won gold medals in the Olympics.

Sporterizing is a legitimate venture, but care must be taken not to venture into Bubba's disrepectful territory. For a detailed breakdown on procedures and replacement parts, see the Tech and Upgrades section.
The contents of GunTweaks.com are produced for informational purposes only. Any modifications to a firearm should be performed by a licensed gunsmith only. Modifications may void warranties, create an unsafe firearm, and/or may cause injury or death. GunTweaks.com and its authors do not assume any responsibility, directly or indirectly, for the safety of readers attempting to use or misuse information, instructions, or procedures provided herein.
Photo used under Creative Commons from simonov
GunTweaks.com