to chrome or not to chrome...
Chromium is harder, slicker, and more corrosion-resistant than steel, so some firearm internals are chrome-plated to increase lifespan and ease maintenance. The practice  began as a way to extend barrel life in machine guns and retard the corrosion caused by corrosive ammunition, but still continues today, long after corrosive ammunition fell from favor, simply as a way to reduce internal friction and extend component lifespan in the age of man-portable fully-automatic weaponry. The bore of the barrel is the most commonly treated component, a process commonly known as "chrome-lining", but chrome-plated gas system, bolt assembly, and muzzle device components can also be found. Chrome-plating is generally not necessary in civilian applications, as civilian weapons are not usually pushed to the extremes where chrome-plating makes a noticeable difference. However, chrome-lined barrels and chrome-plated components are nonetheless common in the civilian market, as any weapon can benefit from the reduced friction, increased corrosion protection, and ease of maintenance provided by chrome-plated components.The civilian AR-pattern rifle market is especially fond of chrome-plating, which can help overcome the reliability issues and cleaning headaches common to many budget/mid-range AR models. Additionally, chrome-plating of the barrel and chamber is mandatory on ARs produced for the US military, and many civilian shooters prefer that their rifle meet “mil-spec” requirements.

Chrome-plating is not without downsides, however. The obvious problem is increased price, as a chrome-plated component is generally 10-40% more expensive than an identical part. This increased price must be weighed against the aforementioned benefits to chrome-plating and made on a case-by-case basis. For example, a shooter using a rifle for target practice at a local range is unlikely to use more than a few hundred rounds of ammunition per year, and is never far from a cleaning kit in the event that complications arise. This shooter is unlikely to ever see the benefits of chrome-plating. On the other hand, a shooter who uses their weapon regularly and/or anticipates multiple shooting sessions with little to no cleaning in between may find that chrome-plating is a helpful and worthwhile upgrade.

A more complex problem, specific to chrome-lined barrels, is the tradeoff between chrome-lined durability and maximum accuracy. A chrome-lined barrel will maintain its baseline accuracy over a non-chromed barrel by a margin of several thousand rounds, but a chrome-lined barrel is less accurate to begin with (all other factors equal). This is because chrome-plating does not self-level like a liquid finish, meaning that any imperfections in the substrate (rifle bore) are not smoothed over, they are in fact magnified at the same time that they are hardened. For example, if a rifle bore has tiny machining imperfections (and all do) such as a groove with a rough edge, that edge is made taller and much harder by the added layer of chrome, deforming a fired bullet more severely and also resisting being worn smooth by repeated firing. This effect can be minimized by careful barrel manufacture, and many high-end barrel manufacturers offer chrome-lined barrels with accuracy comparable to their non-chromed barrels, but the tradeoff between maximum durability and maximum accuracy is a question well worth considering for barrels from budget or mid-range manufacturers.

Further complicating the situation is that all chrome-plating is not created equal, and it is difficult to tell the difference between quality plating and cheap plating by eye. The principal difference is the thickness and composition of the plating, which can vary widely. A quality plating job will have been plated thickly with hard chrome of around 67 hardness on the Rockwell scale. The part will then be inspected to ensure the added plating’s thickness is still within the part’s dimensional specifications, and ground or otherwise machined back into spec if/where necessary. Cheaper plating jobs use a thinner layer to avoid the risk of going out of spec (which would incur extra machining costs) and use less expensive plating materials, resulting in a softer chrome. It is also speculated that some shops use a nickel substrate to give better adhesion for the cheaper plating material. Whatever the cause, it is well-documented that inexpensive plating can result in chrome-plated components “flaking”, or shedding their chrome plating in chips that can jam a firearm’s action or at the very least accelerate wear until they are found and removed.

Also worth noting is that chrome-plating is not the only game in town as far as corrosion resistance and surface hardness. Engineered finishes such as melonite (also known as nitriding) and nickel-boron rival or surpass chrome plating while staying reasonably cost effective. In the future, these modern processes will likely supplant chrome plating as manufacturing techniques improve and costs drop, but for now, chrome-plating is still the most common choice simply by virtue of its vast manufacturing and tooling heritage. 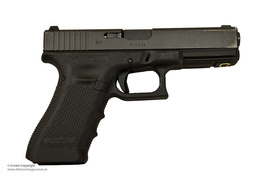 Glock slides are finished with a proprietary nitride process called Tenifering.
The contents of GunTweaks.com are produced for informational purposes only. Any modifications to a firearm should be performed by a licensed gunsmith only. Modifications may void warranties, create an unsafe firearm, and/or may cause injury or death. GunTweaks.com and its authors do not assume any responsibility, directly or indirectly, for the safety of readers attempting to use or misuse information, instructions, or procedures provided herein.
Photo used under Creative Commons from Defence Images
GunTweaks.com