When you think “Ruger scout rifle” you probably think of the Ruger Gunsite Scout, not the Ruger American. However, like virtually every off-the-shelf scout rifle, Ruger’s Gunsite Scout is not really a scout at all. The off-the-shelf scouts from Ruger, Savage, Mossberg, and Howa might look like scout rifles, but any fool can add a big magazine, peep sights, and a threaded muzzle to a bolt gun; those features alone do not make a scout rifle. The difficult part of making a scout rifle is making weight: ideally 3kg (6.6 lbs) unloaded, with accessories (bipod and sling).

We're not ones to worshipfully and rigidly adhere to Jeff Cooper's original scout formula, but we think he was absolutely bang-on with regards to weight, and the scout rifles from Ruger, Howa, Mossberg, and Savage all tip the scales at 7+ pounds without a bipod or sling, with the Savage being the most heinous offender at 7.8 lbs. Add in a scope and accessories and you could easily have a 10 lb rifle on your back. They're cool guns, but they're not exactly the light, handy scout rifle concept.
Side Note: If you like scout rifles (and who doesn't?) then check out the ranger carbine. It's a similar concept developed in-house by GunTweaks that shares some design features with scout rifles, but places a greater emphasis on combat practicality and day-to-day affordability. 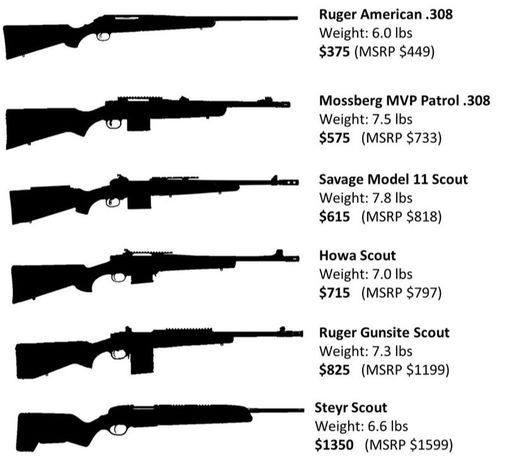 So why don't the off-the-shelf scouts make weight? Well, the easiest way to cut 1-2 lbs off a bolt-action rifle is to get a hand-laid synthetic stock, which is a proposition of at least $300, sometimes double that. The Steyr Scout, which weighs exactly 6.6 lbs, will set you back well over $1,000 and many "featherweight" bolt-actions cost about the same. Most folks aren't toting their scouts around the back country for days on end, so they won't notice the extra pound or two of cheaper materials. Additionally, gun manufacturers know that a "true" scout rifle can be a pretty unpleasant rifle to put a box of ammo through at the range, which is where the vast majority of scout rifles will live. A 6.6 lb, carbine-barreled .308 kicks hard and has an eardrum-bursting report - thus, the $500-$800 rifles that LOOK like scout rifles, but AREN'T really scout rifles, are good sellers.

But why settle for "looks like a scout"? Enter our hero: the Ruger American rifle in .308. Now available from the factory with an 18" threaded heavy barrel and AI-style detachable magazine at 6.2 lbs, or in plainclothes with a standard weight unthreaded barrel at 6.0 lbs.  This rifle may not have iron sights, but its two trump cards are that incredibly low weight and a street price of around $400. The Ruger American is a full half pound lighter than the Mossberg Patriot, which is its closest competitor for weight, and all the other budget bolt guns are even heavier. No fancy stock is needed because the American does away with the big recoil lugs and bedding blocks that make other bolt actions so heavy, instead using v-shaped bedding that gives metal-metal interface between the stock and action while still keeping weight low. 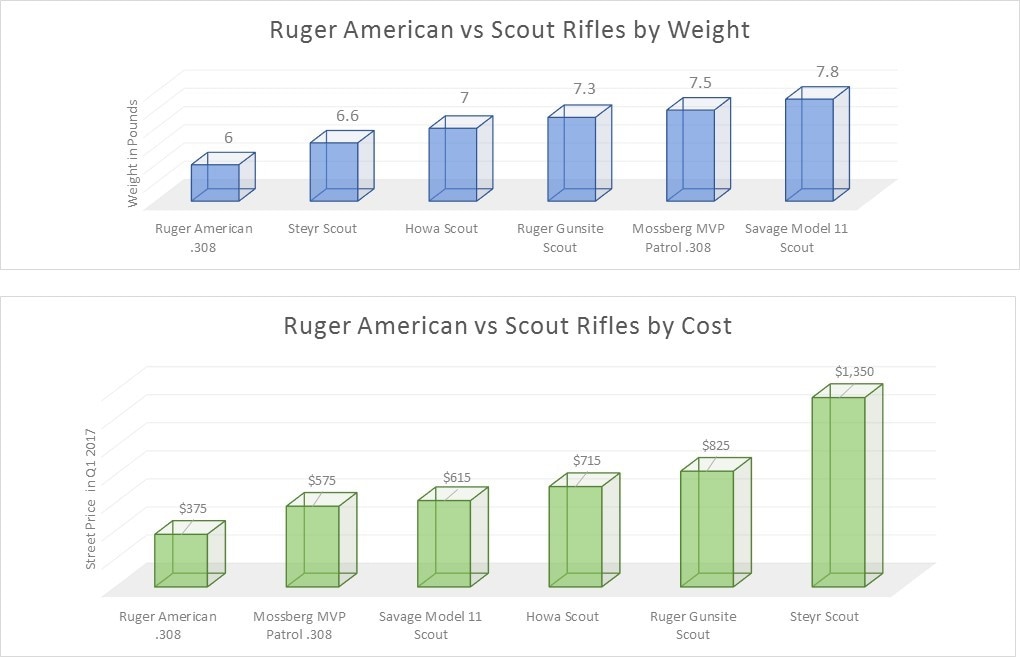 ​You could buy the American or American Compact (shorter stock and 18" barrel) in .308 and add iron sights, a scout scope rail, and maybe even a threaded muzzle with all applicable gunmsithing fees, and still have money left for ammo compared to the cost of most off-the-shelf scout rifles. Plus, you’d have the very rare distinction of having a "true" scout rifle, light and handy, with the American's buttery action and sub-MOA accuracy as bonuses. Or, trade up to the American Predator, which is available from the factory with an 18" threaded barrel and AI-style magazine at the cost of a tiny bit of extra weight.

Scout rifles are cool guns, but they don't have to be expensive or heavy. If you're in the market for a light, handy, do-everything rifle, give the good ole' Ruger American a second look.
Articles you might also like:
The contents of GunTweaks.com are produced for informational purposes only. Any modifications to a firearm should be performed by a licensed gunsmith only. Modifications may void warranties, create an unsafe firearm, and/or may cause injury or death. GunTweaks.com and its authors do not assume any responsibility, directly or indirectly, for the safety of readers attempting to use or misuse information, instructions, or procedures provided herein.
GunTweaks.com