Note: Pistols shown in blue above are models we have review articles for.

We wanted to know how pistols on the market today stack up in terms of bore axis, so we measured as many pistols as we could and created the chart below (scroll down just a bit). Measurements are taken via calipers from the centerline of the bore in the slide down the exact center of the grip curve. A high-hand hold on your pistol is all well and good, but this spot on the grip will be where the most force is exerted against your hand, making it the fulcrum around which the pistol turns when it flips upward under recoil. 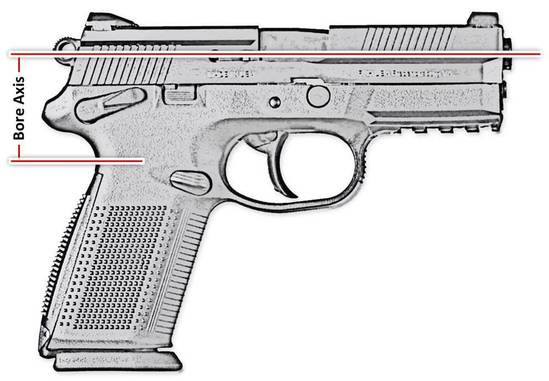 From best to worst, see how most of the modern pistol market ranks for bore axis height, plus another measure called Alignment Index that we came up with while researching this article. It turns out that there's a lot more to bore axis than just numbers, so we encourage you to check out the article below the chart, as well. We'll explain what the Alignment Index is and why you should care about it, and talk all about bore axis: what it is, its pros and cons (yep, there are some cons), and whether or not a low bore axis pistol is right for you.

First up, the big winners:

And finally, 'The 1.5 Crew'. These are all striker-fired pistols with near-perfect alignment indexes (1.00 +/- 0.1) and bore axis heights of around 1.5" - with rare exceptions, that seems to be as low as manufacturers can go before they have to start compromising on alignment index. Thus, these guns can be considered the best "compromise" category. If you demand perfect alignment, then bore axis rarely gets lower than these:

​And now, the full chart: 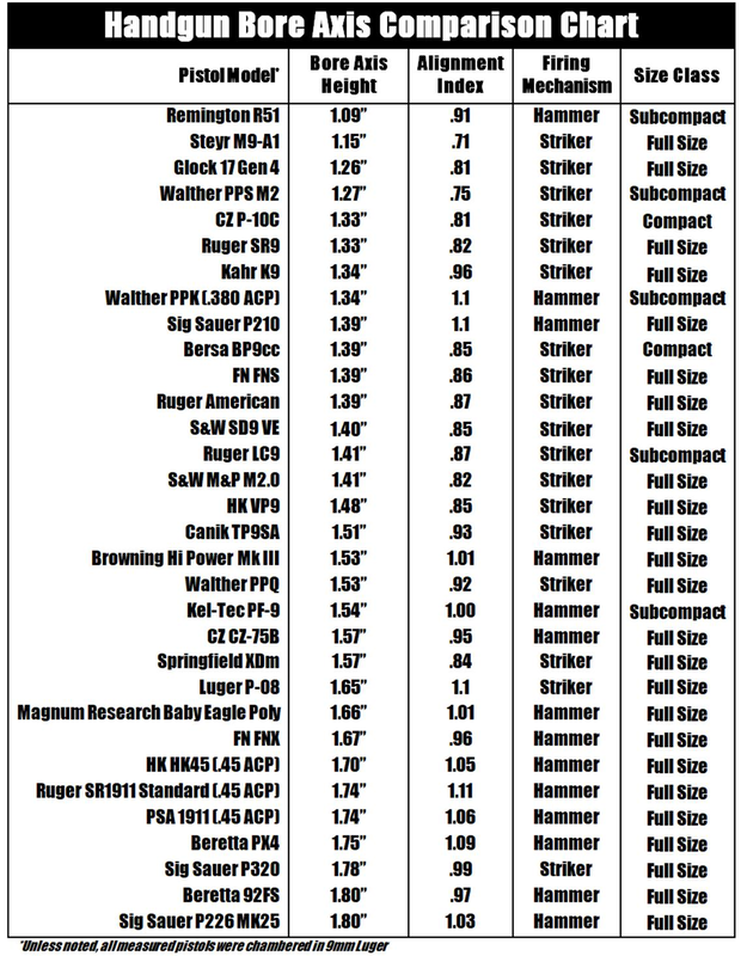 Pistol Bore Axis: An Explanation, Plus Pros and Cons
​
In pistols, bore axis describes the height of the barrel and slide above the shooter's grip, and while it isn't a characteristic that all shooters consider when buying a pistol, they probably should. The basic principle is pretty simple: when a handgun recoils, the higher the barrel and slide sit above your hand, the more leverage they have and the harder it is to control muzzle flip. Pistol designs that sit the barrel and slide as low above your grip as possible reduce that leverage, and make recoil easier to control. If you're torn between competing pistols, you could do worse than simply consulting our chart and choosing the one with the lowest bore axis.

That said, low bore axis is not an automatic win-win. Low bore axis pistols often feel less comfortable and pointable than their high bore axis counterparts, because low bore axis guns are forced to put the pistol's grip and trigger out of alignment. When you hear people say, "Glocks are fine, but they just don't point like my 1911", for once, they're not just being difficult.

Prior to about 30 years ago, the majority of the handgun market was hammer-fired, and almost all of these pistols were designed with the centerline of the trigger and and centerline of the grip curve in almost perfect alignment, as shown below. ​This design is a pleasant by-product of the pistols being hammer-fired, because almost all hammer guns need a fairly high bore axis to accommodate the clockwork of the hammer and trigger group in between the grip curve and the bore (there are rare exceptions to this rule - hammer-fired designs that do not use a tilting barrel, such as the Remington R51 and the Walther PPK, have very low bore axes). ​So, designers of these hammer guns got the bore as low above the grip curve as they could, given the hammer's lockwork, and then simply plopped the trigger in line, allowing the shooter's hand to align naturally and giving many of these pistols a sense of "pointability".

With hammer-fired pistols like these, you can often draw a perfectly straight line between the center of the grip curve and the trigger.
Now, enter the heyday of the striker-fired pistol, starting with the Glock 17. By going hammerless, designers were able to remove a lot of the gadgetry separating the grip from the bore, and since it is generally accepted that a low bore axis reduces recoil, they jumped all over the opportunity to put the grip and the bore closer together. Starting with the Glock 17, striker-fired, low bore axis pistols began appearing in droves, but they all had one thing in common: the grip curve and trigger were no longer in alignment. Now, it was the trigger lagging behind, unable to be moved closer to the bore due to the required lockwork. 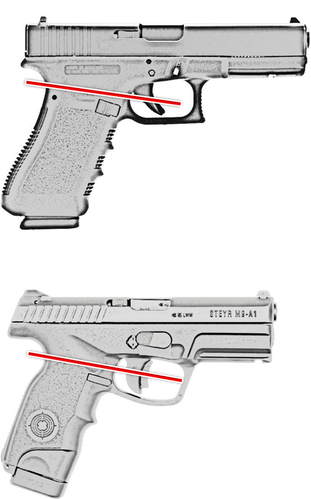 Striker-fired pistols like these often place the center lines of the grip curve and trigger out of alignment with one another.
We came up with a measure called the Alignment Index to score how well the trigger and grip curve line up. Most hammer guns have an Alignment Index of around 1.0, meaning perfect alignment. Most striker guns score below that, especially the ones with unusually low bore axes, and the lower the score, the worse the alignment between the trigger and grip curve.

Now, the trigger and grip curve being out of alignment (a.k.a. Alignment Index below 1.0) isn't a deal breaker; if it is, somebody should definitely tell the millions of satisfied owners of Glocks, Springfield XDs, S&W M&Ps, etc. All the previously listed guns have low alignment indexes, but they're still great pistols. However, low alignment index is a very real factor to consider when it comes to comfort. Walther, a name that is synonymous with comfortable handgun grips, maintains a near-perfect 1.0 score on the Alignment Index (the trigger and grip curve are perfectly aligned) in both their full-size hammer-fired AND their full-size striker-fired guns; every single one. They could lower the bore axis, but they won't. On purpose. The result? The Walther PPQ probably has the most comfortable striker-fired handgun grip on the market today. The P320 from Sig Sauer, new trusty sidekick of the entire US Army, also maintains close to a 1.0 Alignment Index, despite being striker-fired, so it seems to be a case of, "just because you can, doesn't always mean you should".

​There are other pros and cons to low bore axis, too. The slides of low bore axis pistols aren't as tall, leaving less surface area to grip when racking the slide, as shown below:

The Sig Sauer P226 on the left has a big, meaty slide - very easy to grab and rack. The slide of the Steyr M9 on the right is much more low-profile.
​On the flipside, a smaller slide also means the slide is lighter, which means less reciprocating mass and thus, even less recoil than just that provided by the low bore axis - many competition pistols have windows or relief cuts in their slides for this exact reason. The smaller slide also makes for a lighter pistol overall, and trims the dimensions to make low bore axis guns easier to conceal (if that's your thing).

So the takeaway?  A low bore axis is not a make-or-break feature, it is simply one of many elements that can add up to a good pistol. Much of it comes down to personal preference; low bore axis guns are undeniably more forgiving of recoil; a lower, lighter slide is going to kick less, that's just physics. Low bore axis guns are also generally smaller and lighter overall, so it's easy to see why the market is soaked with them. Yet, maybe the most controllable gun is actually the one that fits your hand like a glove. Perfect trigger-grip curve alignment (Alignment Index = 1.0) makes for a fine-shootin' pistol, and some big names like Walther and Sig Sauer are going all in on the concept, even with their latest and greatest offerings.

So what's a buyer to do? Well, the chart we've made should help you to narrow the field, but it's just data. Maybe you can rule out this pistol or that pistol based on our measurements and your preferences, but to find the pistol that's right for you, you need get out of your chair, find a range that rents pistols, and go put some groups on paper. At the end of the day, low bore axis, high bore axis, aligned or misaligned trigger and grip, it's all just details, and it can't account for the million and one factors that are unique to your grip, your stance, your hand size, etc. What really matters is which gun lets you shoot the tightest group the quickest, and for that, you need to start generating your own data, one spent casing at a time.

Happy shooting.
Thinking there's more to recoil than just bore axis height? You're right. Bore axis is only one of four major factors that determine a semi-automatic pistol's recoil characteristics. Check out our new article Beyond Bore Axis: Handgun Recoil Characteristics.
The contents of GunTweaks.com are produced for informational purposes only. Any modifications to a firearm should be performed by a licensed gunsmith only. Modifications may void warranties, create an unsafe firearm, and/or may cause injury or death. GunTweaks.com and its authors do not assume any responsibility, directly or indirectly, for the safety of readers attempting to use or misuse information, instructions, or procedures provided herein.
GunTweaks.com