A typical ACOG
ACOG is an acronym for Advanced Combat Optical Gunsight, and is a trademark of the Trijicon corporation. The ACOG is a magnified gunsight (scope) with an illuminated reticle, commonly seen in use by the United States military. ACOG sights are available in a wide variety of sizes, magnifications,  and reticle patterns, although most shooters are familiar with the 4x32 ACOGs commonly issued to riflemen in the Army and Marine Corps. ACOGs offer exceptional reliability and performance in a wide range of lighting situations and environments, but are prohibitively expensive to all but the most dedicated civilian shooters.

Accurizing is the process of improving a firearm's accuracy through modification and/or replacement of factory components. Common accurizing procedures that do not require replacement components include bedding, free-floating, and polishing the trigger's mating surfaces (trigger job). See the Tech section for more information.

Many modern firearms are based off of the AK platform. See the Intro to the AK topic page for more information.

AOW (any other weapon)

AOW is an acronym for Any Other Weapon, and is a term used to describe NFA firearms that do not fall under easily identifiable restrictions (such as SBRs and SBSs) but still must be regulated.  Highly unusual or concealable weapons such as pen guns or ballistic knives are classified as AOWs, as well as pistols with vertical foregrips and stockless, short-barreled shotguns.

Many modern firearms are based off of the AR platform. See the Intro to the AR topic page for more information. 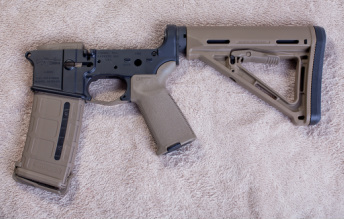 Black AR lower with tan buttstock, pistol grip, and magazine
The "lower" of an AR is the lower portion of the receiver. The lower is the regulated portion of the AR, meaning that it is the key component of the firearm that is taxed, tagged, and tracked by the authorities.  Virtually all other components of an AR may be bought, sold, and traded without any paperwork involved.

AR lowers provide a frame for the FCG, buttstock assembly, grip assembly, and magazine well. Lowers can be made of many materials, including steel and various polymers, but by far the most common choice is aluminum (extruded for budget models, forged for premium models, machined billet for those with more money than sense).

A variety of uppers may be swapped onto the same lower, so many AR enthusiasts maintain a single lower and a variety of uppers that are swapped on and off the lower to change the rifle's caliber, barrel length and profile, or optics system. Unusual uppers like crossbows and .50 caliber bolt-actions are also available, though these uppers have nothing in common with the AR operating system and simply interface with the FCG and buttstock assembly to provide a shootable platform.

See the Intro to the AR topic page for more information. 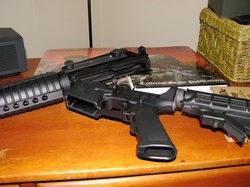 Assembled AR with upper and lower separated.
The "upper" of an AR is the upper portion of the receiver. Uppers are generally unregulated, so uppers and their components can be bought, sold, and traded without any paperwork or fees.

AR uppers provide a frame for the action (BCG), the barrel, the handguard, and the sighting system.

A variety of uppers may be swapped onto the same lower, so many AR enthusiasts maintain a single lower and a variety of uppers that are swapped on and off the lower to change the rifle's caliber, barrel length and profile, or optics system. Unusual uppers like crossbows and .50 caliber bolt-actions are also available, though these uppers have nothing in common with the AR operating system and simply interface with the FCG and buttstock assembly to provide a shootable platform.

See the Intro to the AR topic page for more information.

An assault rifle is a select-fire infantry rifle that fires an intermediate cartridge (more powerful than a submachine gun, less powerful than a battle rifle) from a high capacity (greater than ten rounds) magazine. The first successful assault rifle was the Nazi Sturmgewehr 44 (Stg 44), which was developed against Hitler's wishes (initially) and used to great effect during the later years of World War II. The next notable assault rifle, a simple but reliable design heavily influenced by the Stg 44, finished development only two years after the World War II and entered service in the Soviet military as the famous AK-47.

Today, opinions vary as to whether the battle rifle or the assault rifle is the "best" platform. Most modern militaries issue assault rifles, as countless battlefield analyses following World War II showed that the single most important factor determining who won and lost was, quite simply, number of rounds fired. However, debate over the value of the "stopping power" offered by full-power battle rifles, compared to the ammunition capacity of troops with assault rifles, continues to this day.

"Assault weapon" is an unusual term in that it is partly a legal term and partly a media buzzword. Legally, an assault weapon was defined by the now-expired Assault Weapons Ban (AWB), which was a part of the larger Violent Crime Control and Law Enforcement Act of 1994. The goal of the AWB was to limit access to firearms that had features specifically designed for military use, such as folding stocks, muzzle devices like flash/sound suppressors, and pistol grips (on rifles and shotguns). This legislation was based on the notion that there was no justifiable reason for a civilian to own a firearm with these features, even including self-defense from criminals, as well as public outcry in response to several high-profile shootings involving weapons that fell under the new "assault weapon" definition.

However, "assault weapons" continue to be an occasional high-profile topic in American politics, with a distastefully short-lived and predictable spike in interest immediately following highly-publicized criminal shootings. Although these events are unequivocally tragic, the public outcry that follows them has been universally short-lived, insufficient to overcome the absence of conclusive proof demonstrating that firearms with features defined under the AWB significantly contribute to violent crime rates. Thus, the ban has yet to be reinstated.

ATF is an abbreviation for the Bureau of Alcohol, Tobacco, Firearms, and Explosives. The ATF is a government organization that regulates every item in its name, as well as participating in the enforcement of those regulations. If you want to buy, sell, modify, or destroy a firearm, you will likely have to go through some ATF paperwork to do so.

A fully-automatic firearm is an auto-loading firearm that will fire more than one shot per pull of the trigger, for example, a firearm that will fire  repeatedly as long as the trigger is held or a firearm capable of firing a three-round burst. Fully-automatic firearms are highly restricted for civilian sale in the US, requiring extensive paperwork and fees and commanding exorbitant prices.

See assault weapon.
The contents of GunTweaks.com are produced for informational purposes only. Any modifications to a firearm should be performed by a licensed gunsmith only. Modifications may void warranties, create an unsafe firearm, and/or may cause injury or death. GunTweaks.com and its authors do not assume any responsibility, directly or indirectly, for the safety of readers attempting to use or misuse information, instructions, or procedures provided herein.
Photos used under Creative Commons from another_finn, www.ShootJoeC.com
GunTweaks.com