Technically speaking, a cantilever is a beam or bar that is anchored only at one end. As such, a cantilever mount is a sight mount that leaves one end unsupported, usually to put the unsupported end closer to the shooter's eye or to make use of receivers that have minimal real estate available for drilling and tapping. In some cases, the extra length of cantilever mounts allows the mount to be fixed to the barrel rather than the receiver, which means that a barrel can be swapped out while keeping the sight (and zero) fixed. This design is commonly seen on pump shotguns , which often have easily replaceable barrels and can thus accommodate a long, rifled barrel with a telescopic sight for shooting slugs at long range, but still quickly switch to a shorter, bead-sight barrel for conventional buckshot or birdshot.

Cantilever mounts are also common on AR-pattern rifles, which frequently have their optic rails crowded with a variety of attachments from iron sights to dot sights to magnifiers and full-size scopes, and the extra space offered by cantilever mounts can make the difference when multiple attachments are mounted simultaneously.

Cantilever mounts are not as stable as traditional mounts, and can subject the sight to much more vibration than would a mount anchored at both ends. However, their accuracy is acceptable for most shooters, and their utility for shotgunners is unparalleled.

Carbine is a loosely defined term, but the accepted generalization is "a compact rifle". A carbine can be a shorter variant of an existing rifle, or an original rifle design that simply has a barrel shorter than about eighteen inches. Carbines were originally issued to troops that needed to be highly mobile, or to troops who worked in cramped quarters (such as artillery crews), but they are becoming more widespread as urban conflict has led to troops demanding a lighter, shorter, more maneuverable weapon.

The term "dragoon rifle" is mostly synonymous with carbine, but fell out of favor in the early 1900s.

In rifles and pistols: a complete, ready-to-fire assembly of primer, case, powder, and bullet is known as a cartridge.

In shotguns (in the US): a complete, ready-to-fire assembly of primer, hull, powder, wad, and shot/slug is known as a shell.

Cartridges and shells, as well as the projectiles they propel, are sometimes called "rounds."

Pistol, rifle, and shotgun casings alongside loaded cartridges.
In pistols and rifles, the body of the cartridge is called the case, or sometimes the casing. Cases are made of brass, aluminum, or steel, and are sometimes plated or lacquered for corrosion resistance. Only brass cases can be reloaded or handloaded, as aluminum and steel are not malleable enough to reform around a new bullet without overstressing the material.

Cheek weld refers to the fit of the shooter's cheek against the stock of a long gun. A close, comfortable cheek weld will support the shooter's head and provide quick, natural aiming. A sight that sits high off of the rifle will require the shooter's head to be elevated above the stock, so it is preferable to always mount a sight as low as possible.
CHF (cold hammer-forged)
This term is usually heard when discussing barrels, and refers to the method by which the rifling was added during the manufacturing process. CHF barrels are made by beating the smoothbore blank around a mandrel shaped in a reverse image of the rifling, a process more generally known as hammer forging. Cold forging means that the material being worked has not been heated to soften it, resulting in a finished forging that has been "crushed" into shape and hardened in the process. Cold forging produces a stronger product than hot forging, but is substantially more expensive due to the costly machinery required. CHF barrels are generally accepted as being the most durable of all barrel types, but they are also the most expensive.

See the article on rifling for more information on other methods of barrel manufacture.

A choke is a reduction in the circumference of a shotgun barrel near the muzzle, which forces the shot into a smaller space as it exits the barrel and provides a smaller pattern at range. Chokes are available in a variety of diameters, and many modern shotguns feature removable chokes that can be swapped in and out to adjust the patterning characteristics of the shotgun.

Most shotguns are equipped by default with a "cylinder bore," which means that there is no choke.

Attempting to fire a slug through a choked shotgun barrel will at the very least cause accelerated wear on the choke, and at worst cause catastrophic failure of the barrel and/or action. However, many commercial slugs have fins on their outer circumference, allowing them to stay centered as they travel down the bore and then swage down to size safely as they pass through the choke.

The CIP is a proofing society for firearms and ammunition. Every single firearm manufactured in a nation that is a member of the CIP must be proofed at a CIP-authorized facility before being sold. Ammunition samples are proofed regularly.

In general, the goal of the CIP is to ensure all firearms are able to withstand the pressures of their cartridge, and to ensure that ammunition generates the appropriate amount of pressure for its type. The CIP also publishes standards and measures, as well as best-practices procedures for firearms safety.

The CIP is a European organization, while SAAMI performs the same function in the USA.

A click is an informal term for a single unit of adjustment to a telescopic or dot sight. 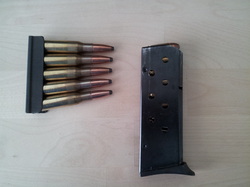 clip (left) and magazine (right)
Commonly confused with magazines,  clips are metal or plastic devices that hold cartridges by the base for easier loading of a firearm. Clips fell out of favor with the rise of the detachable magazines, which do not usually require the bolt to be opened (as clips often do) and offer more protection for the cartridges they hold. However, clips still see use for quickly reloading magazines (stripper clips) and for reloading revolvers, which cannot use magazines.

Traditionally, bluing steel involved submerging the steel in a boiling chemical bath. Today, this is referred to as "hot-bluing," while "cold-bluing" compounds are more of a dye than an actual finish and have very little in common with hot-bluing compounds. Cold-bluing compound can be applied using only a small brush, and although it provides little to no abrasion or rust resistance, it is nonetheless useful for touching up small blemishes without incurring the cost of stripping and re-bluing the firearm.

This term requires a great deal of explanation. Please refer to the topic page on converted guns.

This term requires a great deal of explanation. Please refer to the topic page on corrosive ammunition.

The definition of a counter sniper is somewhat loose, given that there is very little to distinguish a "counter sniper" from a regular sniper, other than whose side they are on. Nonetheless, several rifle manufacturers offer so-called "counter sniper" models  which are essentially shorter, lighter, more maneuverable versions of an existing long-range rifle design.

When the sights on a rifle or pistol are co-witnessed, it means that the iron sights can be seen through the lens of an attached dot sight. This is to provide an instantaneous transition to iron sights in the event that the dot sight's battery fails or the sight becomes otherwise nonfunctional. If the sights are not co-witnessed, the dot sight will need to be removed before the weapon can be aimed effectively.

Cut shells.
A cut shell is a birdshot shell that has been cut at an angle along its circumference, allowing the cut shell to remain as a single piece after the cut has been made. When the cut shell is chambered and fired, the front half of the shell completely detaches and is fired as a plastic slug containing the birdshot. In many ways, a cut shell acts like an extremely large-caliber frangible bullet, causing massive trauma and providing accuracy and range approaching that of conventional shotgun slugs.


Cut slugs do not have the full accuracy or penetrating power of true shotgun slugs, and it is not recommended to load them in tube or box magazines as they are prone to coming apart prematurely, spilling shot inside the magazine and potentially jamming the action. However, they are an effective emergency hunting round, extracting power and accuracy from even the most inexpensive shotgun shells.

see also: wax slug
The contents of GunTweaks.com are produced for informational purposes only. Any modifications to a firearm should be performed by a licensed gunsmith only. Modifications may void warranties, create an unsafe firearm, and/or may cause injury or death. GunTweaks.com and its authors do not assume any responsibility, directly or indirectly, for the safety of readers attempting to use or misuse information, instructions, or procedures provided herein.
GunTweaks.com